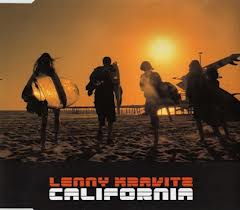 Did you know that Lenny Krawitz and Slash were going to the same school?

Slash wrote that in his autobiography that we strongly suggest you to read, it doesn’t talk only about Guns and Roses but also about the rock n roll life in Los Angeles at the beginning of the eighties.

But let’s go back to Lenny ( no books made on him yet) and to his 49 years…… would you imagine that..? he still looks amazingly good!

He started his career back in 1985 when he decided to self-produce his first album and later decided to sign together with Virgin Records.

He is the first (and only) male singer to have won 5 Grammy awards consecutively as the best male rock performance.

California is extracted by the album Batism that has a particular story.

At the beginning he was planning to do an album inspired to the ’70 funk, then he embraced his acoustic guitar and he decided that funk could wait.

Batism is a pure “Lenny Kravitz” rock and roll album, California is the third single extracted out of it and describes about his move to Cali when he was young.

Lenny, in fact, is originally from New York…… he moved to LA following his family and there he discovered the rock and roll, the surf, the music , playing guitar and the sun.

So California contributed to the success of Lenny that now is celebrating 27 years on the road…….