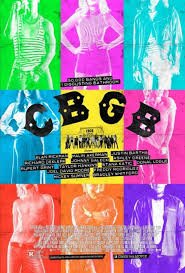 When we read the reviews on the newly released CBGB (4th october 2013) movie we didn’t know what to expect due to the fact that the majority of them were very negative.

We said to ourself that, no matter what the other people were saying, we had to see a tribute to an historic punk/rock club like CBGB and, guess what………WE LOVED IT!

The key to be able to read the movie is not to focus on the story of the characters, the silly dog that shits all over the place, the junkies and madmen that are all around; what is important is to keep an eye on one person only: Hilly Kristal, the founder of the club.

He was for sure a special person, he loved music and, despite is original idea to open a “country music club”(CBGB meant COUNTRY BLUE GRASS and BLUES) he was able to understand what the street was bringing to him : a new music genre, the punk.

Looking to the movie you will just get an idea of what this place represented for generations of bands and for the music in general, while we hope you will understand the man.

If you will end up passing buy NY, you should stop at the 315 Bowery Street; the club now became a shop of John Varvatos but (THANKS JOHN!) the walls covered by the famous graffiti were preserved and are now part of the store itself.