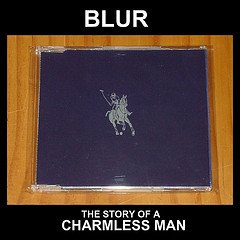 Apparently Damon Albarn said that, with this song, the era of British Pop was over, at least for the Blur.

Charmless Man is the 5th single released out of the very successful album “The Great Escape” dated 1995.

The lyrics of the song are talking about a man part of the high society, he is very well educated and he enters in the most exclusive circles, but, when it speaks, you get to discover that he is fake, that everything he says is not genuine, so you lose your interest of talking and spending time with him.

We don’t know who is the charmless man protagonist of this song (if any); apparently Damon selected the title of this song taking inspiration from a graffiti found in a toilet on a rail station while he was visiting his grand mother.

The video of the song, directed by James Thrawes is just fun, there is this man, very uptight that cannot escape from the band wherever he goes….

It might be that this is just a juxtaposition between “noble” class and the  british working middle class? we will let you decide…..