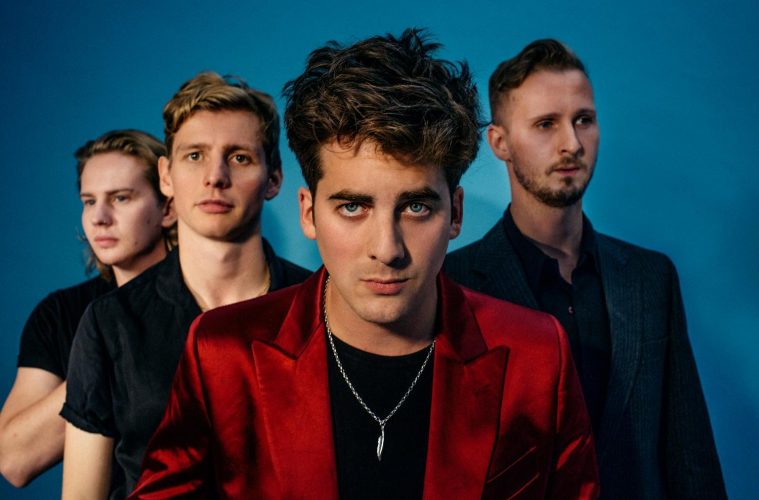 Following a recent European tour, Circa Waves unveil ‘Times Won’t Change Me,’ the new single taken from their third album ‘What’s It Like Over There?’ – out April 5th via Prolifica Inc. / PIAS.

New single ‘Times Won’t Change Me’ is a piano-led gospel inspired anthem: Circa Waves as you’ve never heard them before. Taking these universal sounds and locking them together into piano-singalongs, swelling orchestras, fuzzy rock and arena-baiting marvels. The track sets the tone for the record’s buccaneering spirit, using drums as a leading instrument rather than a thumping follower.

The band also share the music video today that mirrors the track’s effortless, yet infectious simplicity. It sees frontman Kieran approach a piano in his dressing gown. As he plays the opening chords of the track the screen splits and sees Kieran transported into a looking glass fantasy world. Complete with a lighting rig and the rest of the band (Joe, Colin & Sam) performing wearing in chic clean-cut black suits and ties. Just as the track builds around that piano riff, so to the video builds itself around the piano, ending with Kieran sitting alone as he was, the moment of inspiration over.

Taking cues from contemporary trailblazers such as Beck and Drake as much as classic troubadours like Joni Mitchell, the band felt inspired to unshackle themselves from traditional expectations of an indie rock band.“There’s a thing with bands being scared of that big epic song, but on your third album, you can afford to be more open. The pop will not hurt you, it’ll set you free!” says Shudall.

The group – Kieran Shudall (vocals, guitar), Joe Falconer (guitar), Sam Rourke (bass) and Colin Jones (drums) – have enjoyed a steady ascent since their debut album ‘Young Chasers’, with their 2017 follow-up ‘Different Creatures’ revealing a radical retooling of their sound, third album ‘What’s It Like Over There?’ sees another sonic shift. This year has already seen them announced for a run of summer festival stints including a 3rd from top billing at Reading/Leeds festival alongside a UK headline tour that will see them play London’s prestigious Roundhouse.

Circa Waves live in exciting times. In the best place they’ve been as a band for a long time, now is the time to expand into something far greater than themselves. Going for gold with bare-chested honesty, things are about to get quite interesting.

WHAT’S IT LIKE OVER THERE? – Track Listing
What’s It Like Over There?
Sorry I’m Yours
Times Won’t Change Me
Movies
Me, Myself & Hollywood
The Way We Say Goodbye
Be Somebody Good
Passport
Motorcade
Saviour