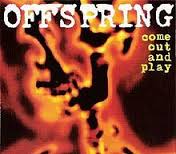 Come Out and Play – The Offspring

When we first heard about what is behind the lyrics of the successful song of Offspring “Come Out and Play”, we couldn’t believe to it.

It has been written in 1993 by the band’s singer Dexter Holland and released in 1994 as part of the album “Smash”, the third of the band.

“Keep ‘Em Separated” is the unofficial title of the song and, apparently, the main source of inspiration of the lyrics.

Dexter studied microbiology at school and at the university and, working in a lab, had as responsibility,  to “keep separated” the organisms subject of his study…….. he tried, but he couldn’t ……. from there the obsession of “Keep’Em Separated”.

So he had to do this while his friends were out playing……….from here the other title of the song.

Did you know that Dexter, ended up graduated in molecular biology? Isn’t Punk?