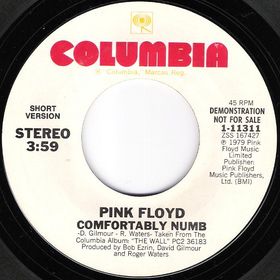 Pink Floyd, one of the most psychedelic band of all time, was funded in 1965 (47 years a go!) by Roger Waters, Syd Barrett (rip), Richard Wright and Nick Manson then, in 1967 David Gilmour joined the band at the guitar.

We are in 1979, is the year that Sid Vicious (Sex Pistols) was found dead in NY and is also the year of THE WALL, an album where David Gilmour is having a psychological trip inside himself and is telling to the fans (and to himself) about his story.

Comfortably numb is a chapter in the story of the alter-ego of David ; “PINK” .

Pink is in an hotel room before a rock concert and he doesn’t feel well at all; a doctor is trying to cure him in order to be able to take the stage.

After this episode PINK decides that the career as a rockstar is over and decides to start a new adventure as a pseudo nazi general but he will end his new venture with all the people against him.

This story is partially real (obviously the one of the nazy guy is fake) , it is related to a concert in Philadelphia where Roger Waters, just before starting it,  was feeling very bad and asked a doctor to inject him with tranquilizers for stomach cramps.

Waters said: ” I had the two most horrible hours in my all life” and “I couldn’t feel my hands”

Once on stage Roger Waters noticed that nobody cared about him was able to play or not, just his presence made the crowd go wild.

He remembered how he felt, he said ” I felt COMFORTABLY NUMB”

David Gilmour added to this one of the best solo of guitar of all the rock history creating a masterpiece that will never be forgotten.

Hello, is there  anybody in there?