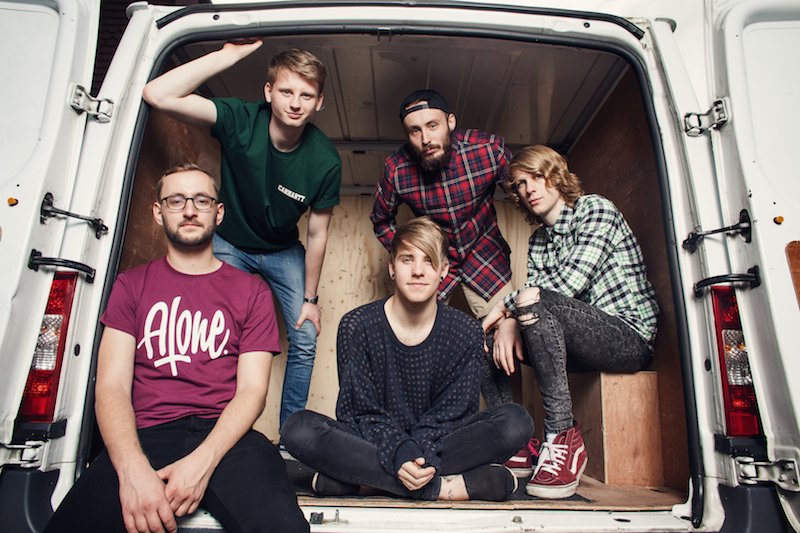 CONCRETE – a new single for AS IT IS

Brighton-via-Minneapolis pop-rockers As It Is have posted a lyric video for the new single ‘Concrete’, follow up to the debut single ‘Dial Tones’.

Both tracks feature on the quintet’s forthcoming debut album ‘Never Happy, Ever After’, which will be released onApril 20th on Fearless Records (tracklisting below).

Packages for the album are available now for a special limited pre-order price:

Creatively inspired by the days when ‘Emo’ wasn’t a dirty word, and the rose-tinted-specs spirit of late, great John Hughes’ celluloids such as The Breakfast Club, As It Is have spent the past two years moulding, melding and meddling with their craft, steadily building a reputation as one of the UK’s brightest new names via independent gigging and fan-funded breakthrough E.P, ‘This Mind Of Mine’. As It Is spent 2014 in somewhat of whirl, with the renowned Fearless Records (Pierce The Veil, Tonight Alive, Motionless In White…) selecting the quintet as the first non-US band to ever be signed to their globally acclaimed roster.

Not ones to crack under pressure, As It Is – completed by vocalist/ guitarist Ben Biss, guitarist Andy Westhead, drummer Foley and bassist Ali Testo – rose to the challenge, and locked themselves away in Walters’ attic for three months across summer 2014 to write, craft and perfect the material for a debut full length. Summoning forth the glory days of Taking Back Sunday, The Starting Line and The Early November, days when heart-on-sleeve lyrical catharsis perfectly synergised with raw pop sensibility.

in October 2014, following breakthrough performances at London’s Alexandra Palace as part of the annual ‘Summer In The City’ event and a successful national tour with fellow UK act Roam, As It Is travelled to Florida for 5 weeks to commit their future anthems to disc, with the help of revered producer James Paul Wisner (Paramore, Underoath, Dashboard Confessional).

The resulting songs from these Orlando-via-Patty’s-attic sessions make up ‘Never Happy, Ever After’, a debut album of such accomplished songwriting savvy that it positively belies the band’s average age of 23.

You could even say it’s everything you might expect when you mix a brain, an athlete, a basket case… Hold on, wrong press release. But, As It Is’ latest creations did come to shimmer with the same quixotic chemistry as the members of John Hughes’ most beloved Club:

“Unlike our previous release, we ultimately wrote these songs without an agenda,” recalls Biss, who co-founded As It Is with Walters whilst ‘on the same pretentious music course at uni’; “We used to get overly hung up on ticking boxes – structure, duration – whereas this time around we just wrote and went with what happened naturally. We found this time around that we don’t disagree as much as we used to. Or at least we deal with things less like bickering shits.”

Bickering would certainly not be a welcome element in such close quarters, particularly when Biss and Walters collaborate on the band’s dual pronged vocal, and indeed lyrical, output.

As Biss explains: “When we write a song, the music always comes first, and from the vibe of the music we pick a theme that we think will suit the song. We then both write separately, even if we’re next to each other, and then piece together the best bits of what we have coherently. Sometimes I’ll write a line that Patty loves and he’ll splice it with a few things he has and vice versa until we have a song that grasps what we want to convey. It’s like writing lyrics knowing that it’s already relatable to two people rather than just one.”

Suffice to say, the old adage ‘From small acorns…’ looks like it will soon become re-appropriated as an elevator pitch for As It Is.