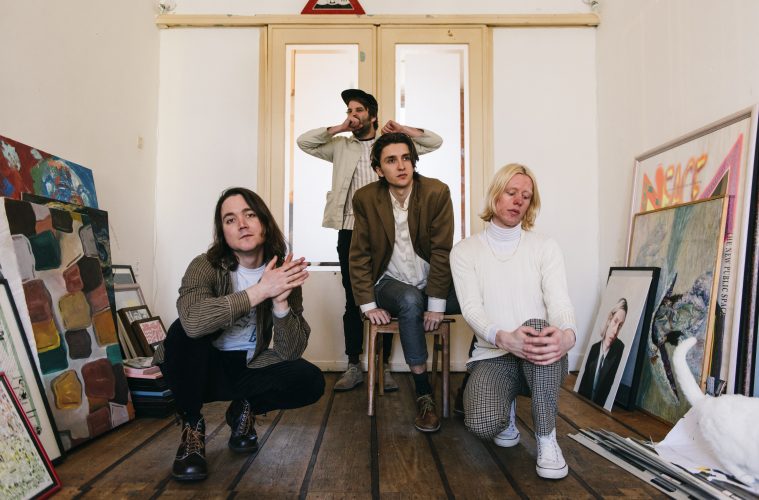 Dadcore – Interview with Mozes & the Firstborn

How do you usually write the lyrics of your songs?
Most of the time there’s a melody first. I use random syllables that sound good with the melody. Then I start dreaming about what I want to say in this song. Frequently there’s part of a chorus or verse that already has cool words and then I build off of that. From that point on it’s like a little puzzle that needs solving.

In your opinion, what is the most important thing in songwriting?
To keep an open mind. Anything in your surroundings – something you see on the street, a book, a movie, a conversation – can give you new ideas. When I start focussing too much on anything in particular in the early stages of songwriting, it loses its magic. The best songs I’ve written happened within half an hour. I know it’s right because right after I feel like an overexcited child returning from a birthday party.

Are you ever scared of revealing aspects of your personal life/experience to strangers through your music?
Yes, but at the same time it’s the most wonderful thing. It’s a healing experience to get feedback from an audience on something that’s so personal to you. People usually interpret your words or melodies in a way you’ve never thought of before. It’s the most amazing thing when there’s a common ground that is instructed by the heart, not the head.

What is the best lyric you’ve ever written, that is the most meaningful for you?
Power Ranger is the most meaningful to me. It’s a song I wrote for myself at a time when my self-esteem was at its lowest. It helped me to help myself so to speak. Although it’s of great importance to me, I don’t think it’s the best lyric I’ve written. Sad Supermarket Song is probably my best one so far. There’s a mix of humour and anxiety that flows very nicely throughout the whole song.

What inspired “Blow Up”, the latest track from album ‘Dadcore’?
I saw a friend that I hadn’t seen in a long time. He was in a bad place and subconsciously I started judging him. Not much later I realised I was in that same place not too long before that. I walked out on him and I felt guilty about that.

And “If I”?
If I is about being in that bad place myself. It’s about feeling stuck in routines that I created myself. It was the first song we recorded for the album and it was a reminder throughout the whole process to push my own boundaries. It’s great when one of your own songs becomes an anthem to you.

Do you remember the day you wrote “Hello”?
In the Netherlands we celebrate Sinterklaas. Like a lot of Dutch families we have this tradition of writing poems for each other. Each year I write a song for somebody. That year I wrote one for my little sister. She was going through a rough patch and I wrote that song for her to feel powerful again. I love writing songs for just one person. Those are the ones that usually are understood by a larger audience. The more you zoom in, the bigger the world gets.

What are your plans for 2019?
Tour as much as possible. Dadcore is a record that deserves to be heard by as many people as possible. And there’s no better way to that than blasting it out live on a stage. In a week we embark on our first headline tour through the United States. 30 shows in 33 days. After that we immediately fly back to Europe to do shows in the Netherlands, Germany, Belgium, England and France. We play the Supersonic in Paris on the 11th of March!

To conclude the interview we like to ask a few quickfire Qs, please answer the first thing that comes to your mind: