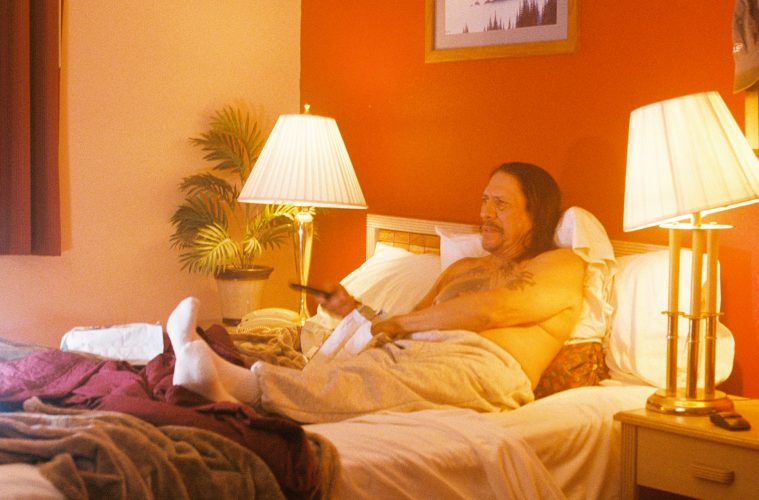 LA based electronic duo OYLS are releasing the music video for their song “Netflix (Your Product Is Too Good)” directed by Nicole Lipp. Both the third single off their most recent album ‘OYLS (For Your Consideration)‘, as well as the third episode in a series of seamless videos dubbed as a visual ‘Pop Opera,’ the video stars legendary actor and Los Angeles local Danny Trejo (Machete, Spy Kids) in a very humanizing role: a lost soul binging Netflix late at night in a motel – with snacks, naturally.

With the hopes to destigmatize mental illness, the band shares, “The song is really about how we cope with our negative feelings, whether they stem from the stress of our daily lives, mental illness, or uncertainty about the world.” OYLS explains, “To have someone of Danny’s stature willing to portray a vulnerable character struggling with his own mind is invaluable to normalizing our conversations about mental health. It really is a huge honor to have him involved.”

“Netflix (Your Product Is Too Good)” takes a minimalistic stance sonically, crafted with an array of electronic warmth. With pulsing, throbbing synths, punctual pronunciation, rich in character and snappy tones softened by the echoing flares, the catchy hook and lyrics are dusted in a lighthearted gleam while holding a colder, more relatable theme. The song has moments of robotic, electro style harmonies adding a haunting effect and samples that add a witty sound but a harsh message, replicating that inner voice we all know.

Reflecting the addiction to the easily supplied, numb living of the modern world, the video shows Danny Trejo unknowingly glued to his screen with an endless supply of munchies, binging his life away. OYLS share, “We explore some of the conflicted relationships we have with pervasive technology and late-stage capitalism. Unlimited content at our fingertips is both a remarkable tool and a powerfully addictive escape.”

Prior to the release of ‘OYLS (For Your Consideration),’ the duo sold space on their album cover for anyone to purchase, with proceeds going to MusiCares, a non-profit that assists musicians struggling with mental illness. Proceeds from this music video will also go to MusiCares and they have made it possible to donate directly to the cause through their Spotify page.

“We hope to impact the discourse surrounding mental illness. It’s such a stigmatized topic but so many sufler on a daily basis that it really shouldn’t be. Hopefully we can help make that change.“

“Netflix (Your Product Is Too Good)” will be followed by five more episodes slated for later this year, released via Handwritten Records.