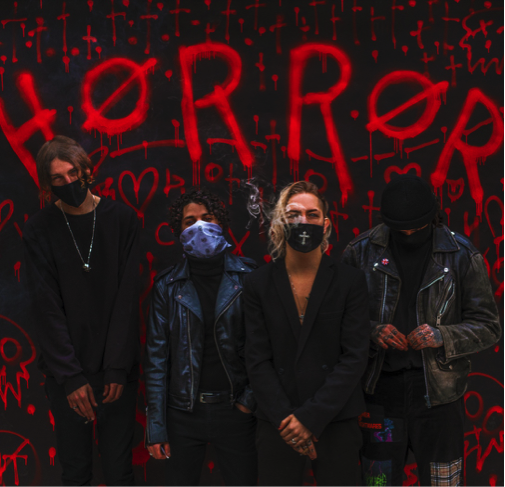 Dare – Interview with The Hunna

I normally write them over time in a note book I have. I like to have it physically written out most of the time. I wouldn’t say I struggle but I don’t like to rush lyrics, I’ve always thought they are the most personal part to a song, I always write from personal experience or stories so getting them down and to come across in the right way that can make the listener connect with me takes time. Sometimes I write lyrics anywhere I am if I feel something or have an idea and sometimes we write all the music and then I write lyrics to the music.

I think for me the most important thing is having a killer story and being able to simply tell that story for everyone.

I wouldn’t say I’m scared of revealing personal life/experiences to fans or people listening.. on our last album there is a song called ‘Mother’ which is about the process of my mother passing and the last time I saw her. Although sometimes I do stop myself and think ‘can I say that?’ ‘Is that too far?’ but with our music we’ve never wanted any limitations to it so I quickly try and snap out of that. I think the hardest part was at the beginning when we were meeting other artists and song writers writing songs and explaining what was in my head to them and whether they were going to understand it.

What inspired “Fever”, part of your latest album “Dare”?

Aha Fever was inspired about a girl that I met that I worked with on a video but was involved with someone at the time but we got on yah know and then the guys saw us around each other and started ripping into me joking around and then ‘she’s got Tino fever’ came out and that’s where it stemmed from!

NY to LA is based around the idea and time in my and the rest of the guys lives of finally touring worldwide and the reality of we aren’t around for a long time anywhere so maintaining any kinds of relationship be it friendship, love, meeting someone and having an amazing time and get lost in it and then we’re off again. We also had a pretty wild time from NY to LA involving an insane American tour driver.. and no sleep.

Do you remember the day you wrote “Flickin’ Your Hair”?

Yeah I do! I actually had a vocal melody and idea in my head and I could hear the guitar with it. We were staying in an apartment in LA for a day or two before our show.. I went up to the top floor with one of our guitars and recorded the idea down then developed a bit more at home.

Duncan Mills is an amazing producer and one of our best friends now! We’ve shared so many amazing moments from recording two albums together and he’s bought our ideas and feelings to the world. He is incredible with pitching and rhythms. The chorus of Flicking Your Hair was originally a bit straighter but in pre production he told us try it a bit more swingy and it’s probably one of my favourite choruses we have of not my favourite!

To show everyone what we can really do now we are free of our ex label/management and to try and be more in the moment and take in what’s happening and be happy.