What music does mean for you?

Music is my hero, unconditional lover, and has saved my life in a hundred ways – at a hundred different times.

I can never give back what it’s given to me. I knew from a very young age what I wanted to commit to in my life, and every day I’m pursuing that dream.

Usually, I get a musical idea from Travis, and now Mike and Brianna, too.

That music inspires words or an idea, and I just follow it. Sometimes they come to me with title ideas, too, but usually the music has a mood or energy to it that I just try to stay open to and follow.

It takes weeks, though, and I always have to go back and change some lines or words. It’s never just started and finished in one sitting for me.

I think a lot and let ideas come. It feels more authentic to me that way.

I don’t really have one favorite, but I can say – as a whole song, lyrically – I am always happy with “Beggar”.

It came from such a subconscious, higher place. A lot of the lyric is still revealing itself to me (personally).

But my favorite part of that song is the line “The stars shine brighter in the winter/ reflect their light on frozen ground”.

It means so many things. I’m always re-interpreting that line with an almost overwhelming, sudden epiphany.

No other song does that to me while I’m singing it.

One of your favorite songs?

“In Your Eyes” by Peter Gabriel. Beautiful and hopeful.

Tell us more about “Quicksand”!

It was written at a time when I was really inspired and sad.

I’ve never cried over an artist’s passing like I did on the morning I found out  David Bowie died.

I hard wept. It was very much a loss, yet also very freeing. So strange; I’d never felt that way.

It was also after we had just played LA and went to Ameoba–and was just such a great time to write.

I was feeling a lot, which usually makes me listen a lot — I’m just more ‘in tune’. I was downloading experiences and feelings and perceptions–and that all became “Quicksand”. 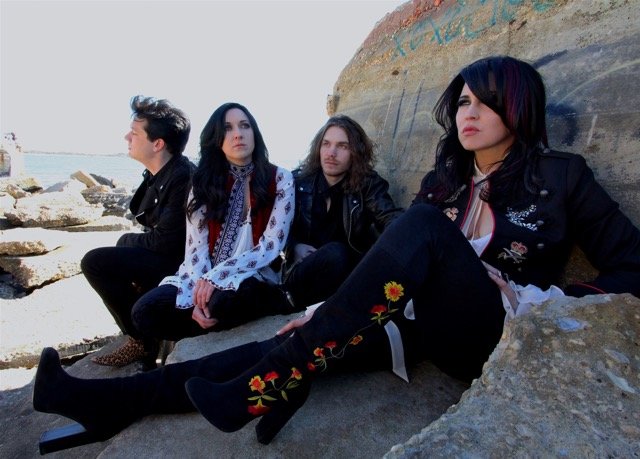 What do you expect from the release of your new album “Dead Reckoning”?

I have no expectations, but I do have a strong wish along with it!

I’m super proud of the work we did together, and the experience of working together. It was very collaborative, and I’ve always kind of been frightened of giving up a vision–giving any control of that up.

But I did, and I was scared to. But I trusted everyone I was working with,  from my band to our producer and engineer, and that became a greater record than I could have ever done alone.

My wish is for as many people as possible to hear it. And maybe see things a little differently from it, or not feel so alone after hearing it. That’s what music has given me.

I want it to affect people, like it has me.

Do you remember the day you wrote “Wandering star”?

I just remember I was listening to “Grace” by Jeff Buckley pretty much non-stop at the time.

I was thinking what it must’ve been like for that friend of his on the side of the river when he disappeared.

That’s where it mainly came from.

What about the day you wrote “Je Ne Sais Quoi”?

That title line was come up with mainly by Travis, but I changed it to the French saying, “Je Ne Said Quoi”, which means “this person has a magic, but I don’t know what it is”  kind of thing.

I had been obsessed with the movie and story of “Gia”, and felt like making the song about her, and that charisma she seemed to have with everyone she met.

Are you looking forward to going on tour?