Interviewing the legend Udo Dirkschneider few weeks before the release of his last album “Decadent” was just great!  Are you curious to know more about it! just read below! 🙂

RYL: Your last album, “Decadent” will be released in few days, which is its main achievement lyrically speaking?

UDO: We are living in a decadent world… a lot of people getting richer, but a lot of them are getting poorer! There is something wrong with it!!

In the album, we are talking about many political subjects…you can take as example the song “House of Fake” where we talk about the governments corrupted and the parliaments that promise but they never maintain.. 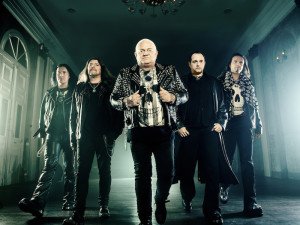 UDO: Traveling is a source of inspiration; for instance “rebels of the night” has been written while we were in Kiev in Ukraine…… a lot was going on at that time over there.

To find inspiration you just need to turn on the tv and watch the news….it gives me a lot of ideas!

UDO: Again, if you turn your tv on , you are exposed only to terrible news….Pain is all about this question “How much more pain we can take”

RYL: Which is the last song you wrote for the album?

UDO: We usually work on all the songs at the same time, but I would say “Shadow Eyes” released in the limited edition album.

It is a song very personal since it talks about my former wife and the things we did together before she left me.

RYL: Your projects of touring…

UDO: we will start in march and we will head all across Europe, then we will have some massive shows this summer and in October we will start again touring Europe and North/South America, Canada and Japan….busy schedule!!!

RYL: It was different to tour in the seventies ?

UDO: Of course it was!   I believe the main difference was the number of people showing up to a concert….now is much more

RYL: Your favorite verse ever written for one of your songs?

UDO: Hard to say about the best verse, I believe the new album has the best material, it could be like this….it is very difficult to choose when you have 25 albums done in your career…

RYL: What “Untouchable” means for you?

UDO: Untouchable is inspired by me……I want to keep going and do what I like for the longest time possible !