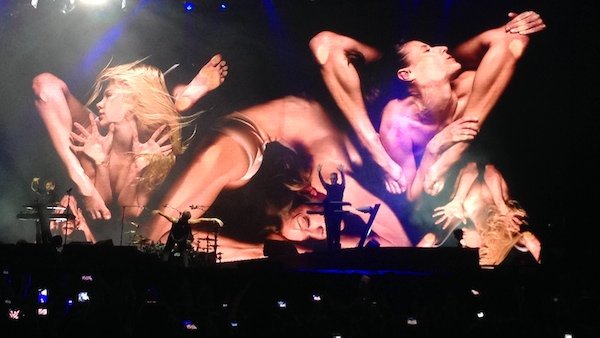 It was the first time for Depeche Mode to play in the capital of United Arab Emirates for a double special occasion: the closing show of the three days formula 1 GP and the starting show of their  worldwide tour.

While we are waiting the band already left Abu Dhabi to Ireland where they gonna play two shows in few days.

Nothing more to say that yesterday night was so special, the band gave to the public over two hours show, a journey that started with the songs of their new album “Delta Machine” and ended with their major successes like

The first song they played was “Welcome to my World”, first single of the album, its powerful beat shook the Yas Island Arena and prepared the crowd to a more than excellent performance.

Dave Gahan had an amazing energy on stage, he was dancing, screaming, falling (yes, we noticed, but we will not tell anybody 🙂 ) and more X-rated moves that we cannot really describe in writing.

The concert reached its top when the band started playing songs like “Enjoy the Silence”, “Precious” and “Personal Jesus”, more than 10.000 people were singing all together, and the psychedelia started.

Last song of the show was a song wrote by the band 32 years ago………. can you guess which one we are talking about? Not yet?