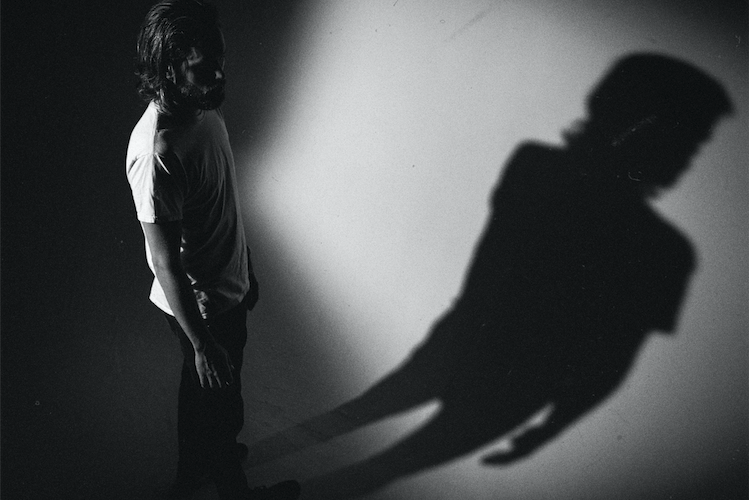 Don’t Touch The Outside – Interview with Thomas Giles

It varies honestly, from project to project or album to album. I try to do things that kind of keep me on my toes so I don’t get too comfortable. For instance, for my solo record “Velcro Kid”, I literally wrote almost in a way of improv. Just kind of whatever popped in my head and I wasn’t even worried about things making sense. Because that music was electronic, I thought it actually fit nicely because it’s a very artificial way of making music. And I kind of wanted the lyrics to coincide with that.

Like with BTBAM, there have been records when even how I write, like right on a notebook rather than a computer or sometimes I lay out a timeline and organize an entire album or as far as a timeline, before I even write a word, I did that with The Parallax series with BTBAM. The Automata records – I kind of wrote as I went along, which isn’t normal for me when it comes to concept records, and kind of figured it out as I went. So it really differs and for this last solo record – “Don’t Touch The Outside” – I continued that “no idea” and I didn’t write any lyrics until I got in the studio. I had all the songs written, a lot of it recorded and I wanted to have really fresh ideas and really write naturally how the songs felt to me that day. So basically, my routine was: I would wake up, get ready for the day, figure out what I’m recording that day and actually write the lyrics that morning, before I started recording anything. So kept it real fresh, there were moments of stress and writer’s block and the things that come along, coincide with things like that. But because of that I kept things very fresh.

It depends. For me, I think I like things that tell stories. Regardless of what the story is, I think it’s important to create something that people can relate to their own lives, regardless of how outrageous or otherworldly the story can get. Especially with BTBAM, I always try to find a way to keep the lyrics grounded enough where regardless of what is happening, maybe you can grab some things from it that fit in with your own life.

But I’ve always been drawn to storytellers and people that are very honest in their music, so I try to accomplish that either through lyrics or music with the band.

I don’t write a whole lot of personal lyrics, but the music we write is very genuine and with my solo stuff, lyrics and music – I try to do that. I try to really write lyrics that are kind of uncomfortable at times for me. That’s a way for me to kind of open up because I don’t really like to do that. And I think the uncomfortable nature of that hopefully makes the song better.

Are you ever scared of revealing aspects of your personal life/experiences to strangers through your music?

Yeah, I think anybody who writes songs feels it. You don’t want to reveal too much. You want to keep your personal life personal, but at the same time, music is a very therapeutic thing for a lot of people, for me as well. And you want to create things that help people and, like I was saying earlier, something they can kind of grasp onto and help them through maybe a situation they’re going through, that can be translated through music or lyrics. I don’t think it has to necessarily be lyrics. I believe music can do a very similar thing. So you’ve got to go with your gut. And if it’s moving you emotionally in some way while you’re writing it, it’s going to move someone emotionally while they’re listening to it, in some ways.

But I guess I don’t think too much about it.

What is the best lyric that you have ever wrote?

I don’t really know how to answer that.

So many songs in the last 15 to 20 years. I don’t know. Obviously, there are songs that I’ve written for my son or my wife and things that are very dear to me.

But there are also songs that are me growing up as a person or getting better at writing lyrics or writing songs, in general, dear to me, as well. Honestly, it’s impossible to answer unless I really sit down and go through it all.

What inspired “Incomplete”, part of your latest album – “Don’t Touch The Outside”?

Like I said earlier, I wrote all the music beforehand, before lyrics. Musically, the intro is actually a separate thing I wrote that I really didn’t know what to do with. I think I even labeled it as “random shit” and it works really well as a start of the song. It just felt the song goes a lot of different directions and some directions that are very new to me, especially the middle sections, really kind of bare bones. That part was tough just because it was so, so bare bones and I’m so used to having a million things going on around me.

So it took a second to get used to that. I felt kind of naked there, in that moment. But lyrics… I think the first line is day three and I’ve hit a wall. That was actually day three when I was in the studio. I was writing lyrics every day. And I was kind of struggling with what to write about. And then I created this story of how we’re all kind of salesmen. As musicians, you are just going door to door every year. Coming out with new music, new albums, trying to sell a legacy and in a way, you create something that people want to continue to buy. There’s pros and cons with that.

Internally, it was just me diving into that moment, once I realized what direction I was going with the song.

Lyrically, it happened very quickly and I wanted to almost poetically write it quickly and have it flow in a way that was not super structured, but it’s just like someone speaking their mind, at the moment and that’s what it was.

I actually wrote a little bit before I went in the studio. So that song is a little different. Musically, I wrote that on tour in Europe – in Milan, actually. That’s how I normally name my demo songs that I write on the road with BTBAM. I was in Milan and that song just really came out of me quickly. I was listening to some older soul music and particularly their ballads. And there have been some more artists that have really touched on that sound, more recently. Michael Kiwanuka, I think is his name. I love the tones of that era and I wanted to create my version of that.

I wanted to write a song with no guitar, but that wasn’t electronic at all. Lyrically, I just wanted to talk about how society and men, in particular, were told to hold in our emotions and man up. As someone who has a son, I don’t want to keep passing that tradition down because I think it’s very important to be in touch with your emotional state and be able to express when you’re upset and cry and all that, and that’s the basis of the lyrics.

When I worked with Christopher of Over, he wanted me to send them lyrics, so a lot of these lyrics were wrote really quick, just to send to him. I remember one night, he was ready to get going on. And I was like: I need to write some more, so I sat down on my laptop and sent him a bunch of lyrics. And from there, we just kind of tweaked it.

Do you remember the day you wrote “Awake From Death”?

I think that one was just what popped in my head, at that time. It was one morning in the studio. And yeah, I wanted to really write how the song made me feel and just what kind of naturally came out of that. There wasn’t a whole lot to that one. It just popped in there.

So other than that, just being a family man, having some other things that I’m working on randomly, that hopefully, I’ll be over to talk about in the future.

To conclude the interview, a short Q&A session. Please answer the first thing that comes to your mind: