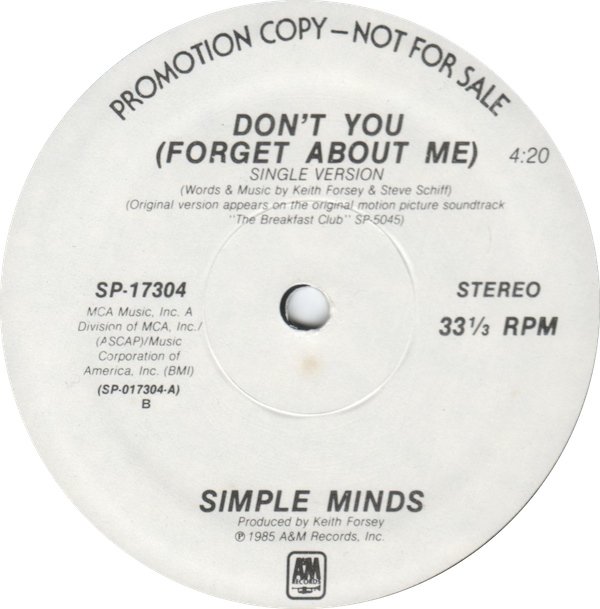 Don’t you (forget about me)

What David Bowie has to do with the simple mind?

You would say nothing, if you didn’t know already that they selected their name from a verse of the song “Jean Genie”…..

The band has been formed in 1977, in full punk era, in fact these are the music roots of a sound that explores punk, British pop rock and alternative.

Charlie Burchill (guitar) and Jim Kerr (vocals) are the two founding members, later joined by Mel Gaynor (drums), Ged Grimes (bassist) and Andy Gillespie (keyboards). Jim and Charlie they also are the creative part of the band,most of the lyrics have been written by them.

“Don’t you (forget about me)” is an exception to this, in fact the song has been written back in 1985 by Keith Forsey ( drummer and producer of Billy Idol) and Steve Schiff.

The song will also become famous due to the movie “The breakfast club” directed by John Hughes.

Forsey proposed the song to Billy Idol and Bryan Ferry, they both declined the offer, so he decided to ask Simple Minds, a band relatively known that time, to record it.

They accepted even if , according to many, they didn’t like it particularly, till the point that they didn’t included it in albums till 1992 (while the song is dated 1985).

Our interpretation of the song is that is all about a man that wants to be left alone and , at the same time, he wants to have the opportunity to have a woman with him “look my way, never love me”.

He does promises about not to hurt her feelings but, in a certain way, he asks her to be near to him, while is dancing alone.

After his release the song hit number one position in the chart and helped Simple Minds to reach over 60.000.000 copies during their career.