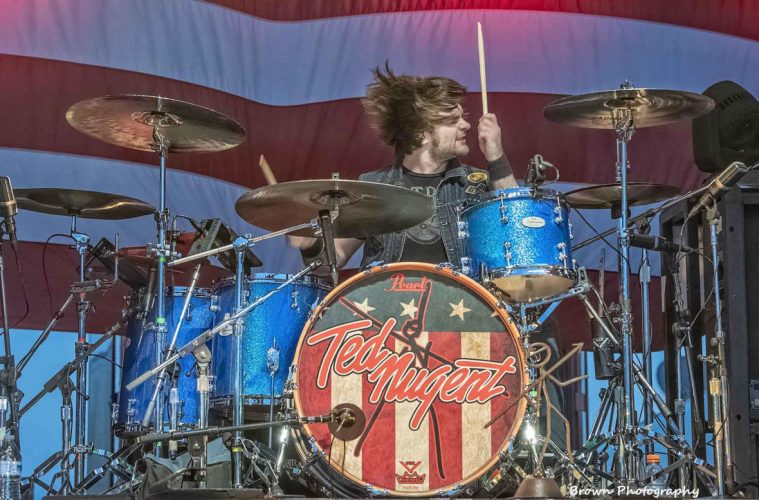 DRUMMER JASON HARTLESS Heads Back on Tour with Ted Nugent on July 19, 2019, Ten Years to the Day After Motley Crue Fest 2 Tour

This July 19th marks 10 years to the day that then 14-year-old drummer Jason Hartless kicked off Mötley Crüe’s “Crüe Fest 2” Tour. July 19th, 2019 finds Jason kicking off “The Music Made Me Do It Again!” Tour with guitar legend Ted Nugent. Yes, ten years later and Jason Hartless is still making a lot of noise in the world of music!

The full list of tour dates can be found at https://tour.tednugent.com/

It was a hot summer night on July 19th, 2009, at the BB&T Pavilion in Camden, New Jersey, when 14-year-old Jason Hartless stepped out on stage to kick off the opening night of Mötley Crüe’s “Crüe Fest 2” Tour as the hired drummer for one of Motley Crue’s supporting acts. Everything changed when the 14-year-old Jason Hartless received a call explaining that a band scheduled to tour on the Crue Fest 2 Tour needed a drummer to crisscross the United States until Labor Day weekend. Without hesitation Jason jumped at the opportunity. This was the summer that Jason was transitioning from junior high to high school, it would also be his first year of marching band camp and drumline. So the choice was go to band camp or tour all summer with Motley Crue. It was not a hard decision.

Fast forward 10 years to the day and Hartless will kick off the opening night of the Ted Nugent ‘The Music Made Me Do It Again!’ Tour, once again drumming for the Motor City Mad Man. This will be Jason’s fourth tour drumming for the rock icon. He started drumming for Nugent in 2016 on the “Sonic Baptizm Tour“.

When asked about memories of the Motley Crue Tour and his current job as the drummer for the Motor City Mad Man, Jason had this to say, “One thing I remember about the Motley tour was all the comradery and friendships made on that tour. I was only 14-years-old surrounded by people all twice or more my age, but I was treated with respect by everyone as their professional peer. The guys in Motley were very cool to me. I remember at 3 am in the middle of nowhere being at a Flying J Truck stop with some of the Motley camp. Nikki Sixx came up to me and asked if I was having a good time on the tour. I could tell he really cared if I was enjoying myself and wanted me to have fun with the experience. I think it possibly was Nikki that approved me at 14 years old to be on the tour in the first place, but I do not totally remember if it was or the particulars. That tour changed a lot of things for me and put me in the direction that I have headed myself in ever since then. I definitely look forward to working with Nikki down the road. After the Crue Fest tour, I worked hard to be the best drummer I possibly could be by taking private lessons from a jazz drum guru, George Dunn, releasing a drum instructional DVD through Hal Leonard and then going on to drumming for legendary rockers Mitch Ryder and Joe Lynn Turner. In 2016 when I became a member of the Ted Nugent band everything I have worked for my whole life came to fruition. Drumming the past 4 years for one of the most iconic and legendary guitarists in rock is just simply incredible and I am honored to share the stage and recording studio with Ted. He is an incredible driving force and keeps us all, the band and crew at level 10 at all times.. The 2019 “The Music Made Me Do It Again!” Tour is a must-see!“