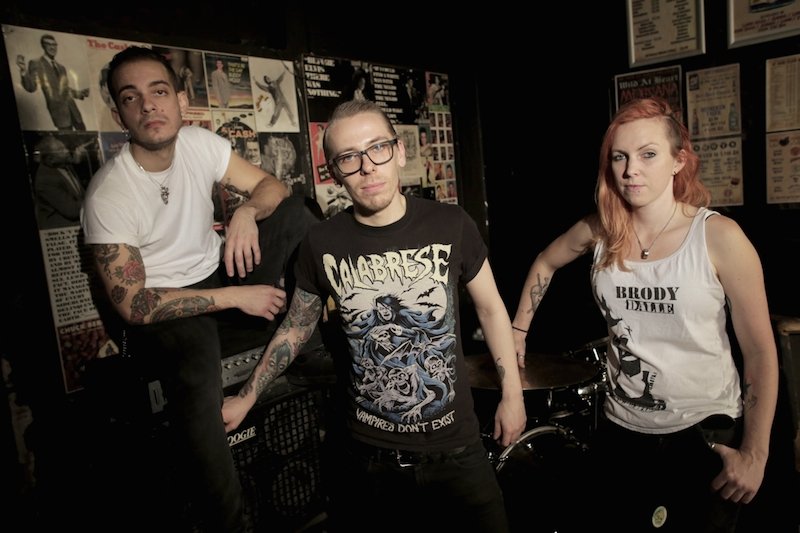 RYL: Your new EP is titled “Eat Pizza”, what does this record mean for you?

LIGAMENTS: Other than the band, pizza is our shared love. When we come together we do two things, make music and eat pizza. It’s our first real release too so it’s an important one for us.

RYL: one of its songs is titled “Turn to acid”….What inspired its lyrics?

LIGAMENTS: (Jake) I spend a little bit too much of my time chain-reading Wikipedia articles and sometimes you come across peoples stories and they are better than anything you could make up. This song was inspired by just such a story I found, the tragedy of German Jewish scientist Fritz Haber and his family.

He was the first person to weaponize chlorine gas and he personally oversaw its first usage on the battlefield during the Great War. His wife was a pacifist and she committed suicide as a sort of protest.

LIGAMENTS: The Ep doesn’t really have an overall theme lyrically. Also the lyrics aren’t pizza related, just the artwork, incase people think we sing about pizza… we love it, but we don’t wanna sing about it!

RYL:  Do you remember how the lyrics of “Precint 13”, first single released from the album, have been written?

LIGAMENTS: That was the first song where the lyrics were split between both of our lyricists (Nicola and Jake).

Usually we would write them separately as a whole song but for this we both had ideas that seemed in sync with each other and the feel of the song.

It’s been a turning point for us as we tend now to write together around a common theme for each song.

LIGAMENTS: It’s been evolving recently, we’re becoming more and more collaborative all the time. We used to each write a whole, nearly finished song and then bring it to rehearsal but more recently we just bring fragments of the music and work on it together with everyone sharing their opinions and input.

We even have a song that started with just a drumbeat, in an unusual time signature for us, that Zel wrote and we gradually turned it into a whole song. We’re moving out of our comfort zone now, away from anything too rock’n’roll based and more towards post hardcore and the darker punk.

RYL: Tell us everything about “In the black lodge”…

LIGAMENTS: (Jake) This was one of the earliest songs I brought to the band. It’s changed a bit over time leading up to the EP recording but the basis of it is the same.

The lyrics are about David Lynch’s masterpiece TV series ‘Twin Peaks’, written from the perspective of the Killer BOB while he stalks victims and disposes of bodies. The name comes from the fictional trans-dimensional location, the ‘black lodge’, where evil spirits are said to dwell.

RYL: If we gave you one dollar to spend on music, which song would you buy?

LIGAMENTS: We’re going to imagine this is £1 instead… I think we would go to bandcamp and donate it for a ‘name your price’ release like Restless by Petrol Girls or Sycamore by Martha. Keep it DIY!

RYL:  How are London and Italy influencing your music?

LIGAMENTS: At the moment London is pissing us all of a little bit as some of our favorite venues are closing down and that’s probably fueling some of the angst in some of the lyrics.

We’re not an overly political band and tend to focus more on events we’ve been through personally these days, but there is a crossover coming in now between the politics we all have as individuals and the increasingly politically charged climate in London and by extension in Europe too.

Italy is home for Nicola, so it can’t help but influence him as a person but its musical history isn’t too much of a direct influence.

Lyrically Nicola definitely draws on his life back in Italy and ties with his family.

On the song ‘4th’ especially this came out, as this song is about his life growing up in a very catholic environment but with an absent father, who is somewhat a ghost, despite being alive.

LIGAMENTS: We’re currently writing a new EP to be released later in 2015. The latest song we’ve written for it doesn’t have a title yet but I can tell you it’s about the closure of a venue that was very close to our hearts, where we played our first show and where some of us met for the first time.

LIGAMENTS: We’re doing a mini tour in the UK from 12th to the 15th of Jan starting at Powerlunches in London and then we’ll be going out to Italy for the 4th time in March, dates TBC