rockyourlyricsApril 8, 20200 views
News0 views 015 min read
In this difficult time, multi-platinum alt-pop trio Echosmith – Sydney, Noah, and Graham Sierota – are spreading love and positivity to their fans through music with a new kind of tour – the “Lonely Generation Digital Tour.” 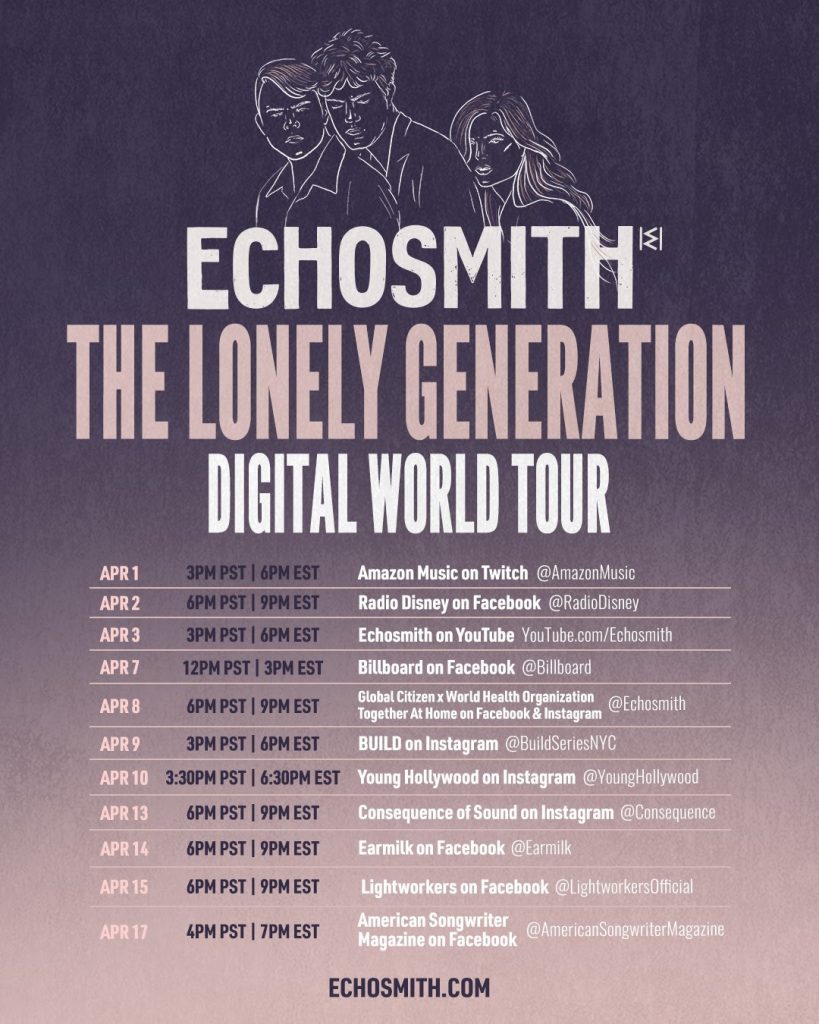 Echosmith are bringing their live performance to digital and social media destinations including Billboard, Global Citizen, Amazon Music, Radio Disney, BUILD, Young Hollywood, Consequence of Sound, Earmilk, Lightworkers and American Songwriter. The band will perform live from their home during this time of quarantine, playing some of their brand new songs from their latest album ‘Lonely Generation’ – including their latest Hot AC radio hit “Diamonds,” “Lonely Generation“ and “Everyone Cries“ – as well as their biggest hits and fan favorites.
The Lonely Generation Digital Tour dates are as follows:
Stay tuned for more dates to be announced!
Echosmith’s latest studio album ‘Lonely Generation’ reached #2 on the iTunes Pop Chart and #11 on the iTunes Overall Album Chart. PRESS HERE to listen. An uplifting and honest coming-of-age soundtrack, ‘Lonely Generation’ incorporates vintage synthesizers and upright piano into a framework threaded together by inventive guitar work as the band ponders the beauty in our differences and embraces individuality and all of the emotions that come with living life. Lonely Generation, produced by Jeffery David (Seal, Zedd, for King & Country), is Echosmith’s first independent release on the band’s newly formed record label, Echosmith Music, created in 2018 with ADA.
The band is also releasing a series of music videos – one for each song on the album. The video for “Scared To Be Alone,” shows Sydney treasure hunting in the desert as she comes to terms with being alone. Meanwhile, “Follow You“ is a romantic video that features Sydney playing guitar while wearing her actual wedding dress and it is also the song she surprised her husband with during their first dance at their 2019 wedding. The video for the fun and flirty album track “Shut Up And Kiss Me“ follows frontwoman Sydney Sierota trying to catch the attention of her love interest (her real-life husband, Cameron Quiseng, who she married last year) who will not take the hint and kiss her. Echosmith will also be featured on Live from the Artists Den this Spring on American Public Television.
Multi-platinum alt-pop trio Echosmith recently released their sophomore album, the uplifting and honest coming-of-age soundtrack, ‘Lonely Generation,‘ earlier this year where it reached #2 on the iTunes Pop Chart and #11 on the iTunes Overall Album Chart.
Their new single “Diamonds” shines a light on the value of individuality, while title track “Lonely Generation” addresses how it can feel lonely in this hyper-connected social media world and is a reminder to focus on real connections. Echosmith is currently on their headlining “Lonely Generation” tour across North America. Last year, the trio joined for King & Country for the powerful Top 20 Hot AC “God Only Knows” (Timbaland Remix).
Echosmith first showcased their melodic, New Wave-influenced sound with their triple-platinum hit, “Cool Kids,” which notched a quarter-of-a-billion Spotify streams, and the double-platinum song “Bright” from their breakout RIAA gold debut album ‘Talking Dreams,’ followed by the ‘Inside A Dream’ EP. Simultaneously, Sydney stood out as a positive cultural force, whether acting as a brand ambassador for Coach, designing a line for Hollister, or dueting on stage with Taylor Swift. The sibling trio, who released their bold, synth-driven Top 20 Hot AC hit “Over My Head” in 2018, has earned critical acclaim from various media outlets. Along the way, the trio has captivated crowds worldwide, toured with twenty one pilots and Pentatonix, garnered over 1 billion streams, and performed on numerous national TV programs including The Ellen DeGeneres Show, The Tonight Show Starring Jimmy Fallon, TODAY, Late Night with Seth Meyers, and The Late Late Show with James Corden.