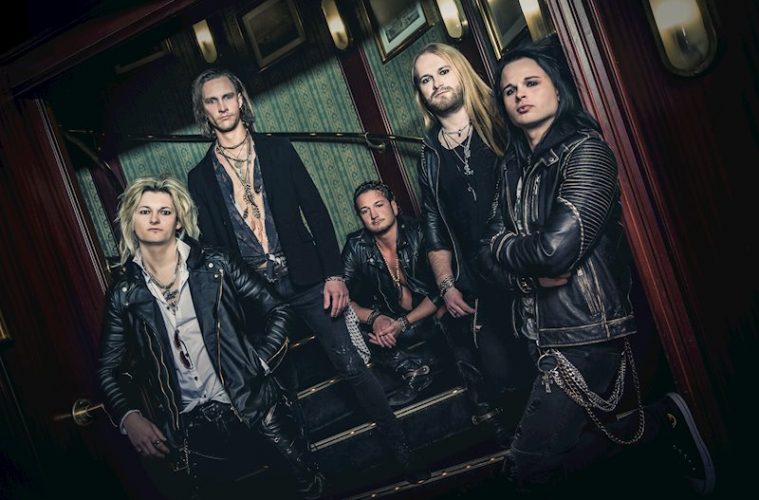 We always start with good slogans. If we like one, mostly Hannes composes a chorus. If we think, we’ve got a good song, he completes the rest of the song including Verses and so on.

The first lyrics for the verses then are always just nonsense, but like that, I get the syllables and the rhymes. So I can relate to that and start writing some hopefully meaningful lyrics.
In your opinion, what is the most important thing in songwriting?
I think, you should have the ability to turn on several buttons in a way, that the biggest amount of energy comes out. Both in music and lyrics. One of the keys to this for example can be big contrasts like a silent verse and a big and mighty chorus. It’s a learning by doing thing.
Are you ever scared of revealing aspects of your personal life/experience to strangers through your music?
Actually not, because I think that if you write about any feelings or problems that you have had, people can relate to this, because they know it as well and so music gets a linking impact. You know, aren’t real emotions what it’s all about in music and life?
If someone’s got any problems with it, I guess, he shouldn’t be an artist 🙂 But of course, as a musician you don’t need to tell about every detail of your private life. I think, it’s a cool way to talk about emotions, but keep it kind of universal.
What is the best lyric that you ever wrote (the most meaningful for you)?
Probably “Utopia”. I like that one, because more or less it’s about the general  danger of losing yourself in something that’s in the outside, something that’s not only you. In this case, this thing in the outside is the fame that a torero sticks to by fighting against the bulls and killing them in the end. He knows that it’s actually wrong, but he’s too weak to stop it. In the end, he’s killed by his greed for fame himself, because after being driven for so many years, he’s so tired that the last bull defeats and kills him. Actually, there still is a happy ending, because after his death he finally get’s the peace of mind he has always wanted and can let go. So there’s really almost spiritual stuff going on here.
I also really love this song, because the emotions of the lyrics and the vibe of the music fits so well together. It’s really going hand in hand here.
What inspired. “Still Around” , part of your latest album Ecstasy?

Obviously, Still Around is about the little moments, when a place, a smell a song or whatever reminds you of your old love for a while. But in this case, it’s not a very desperate or depressing vibe but more a kind of „Oh yeah, back then we had some really good times“ – feeling, going along with an inner smile, kind of bittersweet if you want. You’ve already let go, but of course, memories will last forever, isn’t it? 😉

And “Hearth of Stone”?
Hannes came up with this slogan. And it’s about people – and i guess everyone knows one of them – who lie to their selves. They pretend to be alright and fine and everything, but the truth is, that they’re only wearing a mask and you cannot feel their
soul anymore. That’s why they’ve got a heart of stone and why it’ll remain as only thing after they died. Actually, this song is similar to Utopia, because those people have lost theirselves, because they only listen to what other people say and care about that too much instead of listening to what’s inside of them.
Do you remember the day you wrote “Superhuman”?
It must have been some day in summer 2017. We absolutely had no pressure at the time so we wrote songs effortlessly every day, just because we had a good flow. In this case, we all liked the slogan “Superhuman”, so I got myself ready to write the verses.
By the time, on the desktop of my computer was a big picture of the milky way, so anyhow I was inspired by this and imagined, that some alien with superhuman abilities (of course female and extraordinary good looking ;)) could have come from outer space onto the earth. That’s, how i developed the whole space / stars / universe – kind of thing for this song. Sometimes, the most simple things can give you inspiration.
What was the best moment of your career? And the most difficult one?
One of the best moments go back in time a lot. It was back in 2006 when me and Jim had our first gig together with Hannes and Ande. Before, we had been two separate bands. It was only a little regional feast, but we all felt a very special vibe in the air.
We just felt or almost saw the potential of what would be possible if we’d stick together. So, this was 12 years ago and the rest is history 🙂
What are your plans for 2018?
A few festivals in summer and then of course the massive tour in fall together with our friends of Powerwolf. Get ready!