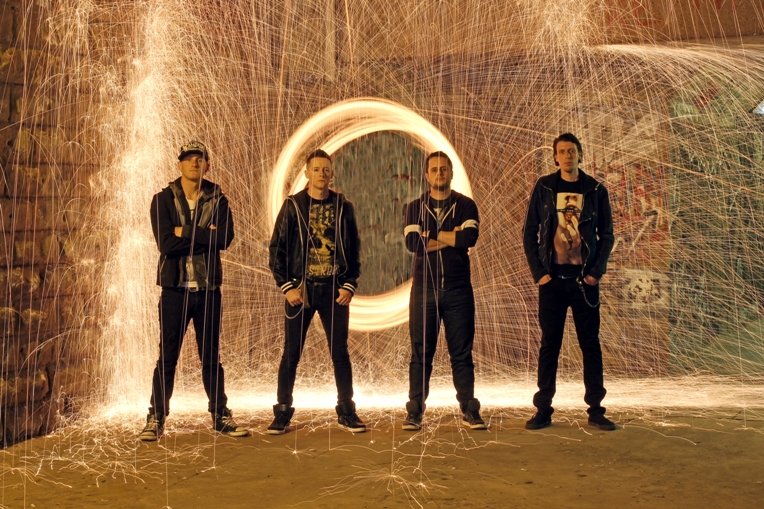 RYL: Your new album “ ELECTED EVIL” was released on the November 3rd, which are its main qualities?

DIE NO MORE: This album which is our debut is the result of a lot of hard work and perseverance. It was written over the last couple of years in-between lots of touring and we really feel it’s a true reflection of where DNM is in 2014.

This line up has been together for almost a year now and the song writing for this album really came together once the 4 of us got in room and just started really focusing on making these songs as good as they could be. Although we are a thrash metal band we really felt it was important to show the different directions we feel comfortable in taking right from the beginning because the last thing we want is to be pigeon holed in to certain categories.

RYL: What inspired the lyrics of “Absentia”?

DIE NO MORE: That song is really about the times in our lives when someone we once loved who proclaimed that they would never leave and would always be there isn’t there when you really need them.

It wasn’t inspired by any one situation it was more that the music had a very dark feel to it and once i gave it the title the lyrics came very easily. It a very universal subject matter and I’ve had a lot of feedback from people saying they can really relate to the lyrics which is always satisfying as a song writer.

RYL: Which is the main difficulty in making new music today?

DIE NO MORE: The making of the music itself isn’t that hard, you save up for money you go to the best studio you can afford and execute your best songs at the highest level you can.

The hard part is getting it out there, you need PR companies to help get it out to all the magazines and radio stations. but really the hard work is just getting our there and touring touring touring because to make connections with the fans who are the ones who actually buy the album is probably THE most important thing because metal fans in particular are the most dedicated in the world and once you make a fan they are usually a fan for life.

So, having a large dedicated fan base is key and to do that you need songs they connect with them and a live show that blows them away.

RYL:  Do you remember how you wrote “Dark World”?

DIE NO MORE: Dark World is a strange one in that it was the first song we wrote for the album and the music and the arrangements came really quickly but it was the last song to have lyrics. It started with a riff which we had been jamming on for a while and one day we said OK lets turn this into a song and that’s what we did and it really didn’t take very long which is surprising to some people because it’s quite a complex song.

DIE NO MORE: I don’t know how many other people do it this way but I have a list of possible song or album titles and every time i hear something or read something that i like i make a note of it. When we start getting songs together and i start coming up with ideas for lyrics i consult my list and usually a title jumps out at me which fits whichever song I’m focusing on.

Once i give a song a title then it gives me a theme if you will in which to focus the lyrics and that helps greatly in focusing and getting the lyrics to work for the song.

RYL: Which is the best verse you have ever written?

DIE NO MORE: That’s the sort of thing i prefer let other people decide but I am really proud of the verses in Dark World as that was the last song I tackled for the album and they were a real struggle, I must have re-written them about 3 times until i finally had something i was happy with, and it ended up being my favourite.

So, I would say the second verse of Dark World would be my pick.

RYL: We give you 1$ to spend in purchasing a song, what would you buy?And…….which one you would never buy?

DIE NO MORE: I would go to the metal section and buy something new that I haven’t heard before because i always try to listen to as much new stuff as possible and keep up with what’s going on in our genre.

I would NOT buy anything pop related as that is really not my thing.

DIE NO MORE: Yes! In December we are special guests of our label mates Absolva for their UK tour. Hitting places such as Birmingham, Norwich, Swindon, Wakefield, Kendal and Burnley so we’re really looking forward to getting out there and taking our album to the people.

RYL: Tell us everything about “Blood in the veins”…..

DIE NO MORE: That is a song about confrontation and settling scores and being totally ready for whatever lies ahead. It really gets the crowd going in our live set and we never tire of playing it. It’s also one of our older songs and it’s testament to it’s strength that it’s held up and made it on to the album.