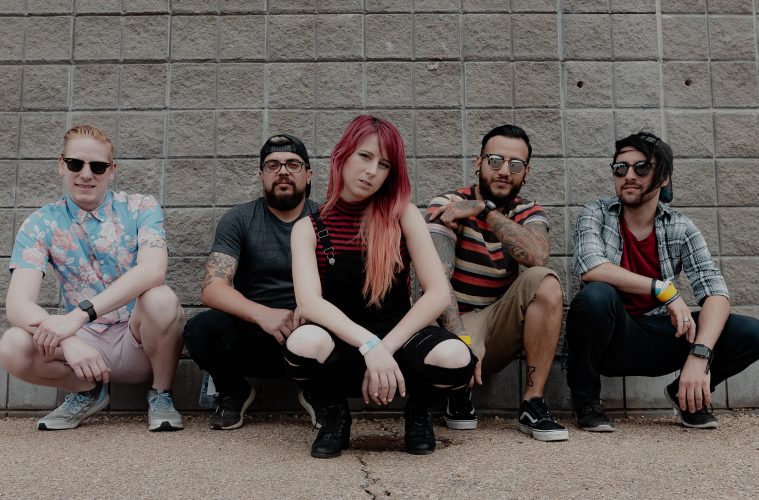 My best ideas come while I’m driving, actually. I drive a lot for work, and I usually listen to NPR and let my mind wander. I’ll start thinking through what’s been going on, and things will start to piece together, first with a line or two, and then build out from there. Voice-to-text and voice memos have been a lifesaver in these moments! The I’ll flesh the ideas out later with a pen and paper, which is still my preferred way of writing.

Ingenuity and honesty are most important for me. I want to feel the lyrics through the vocalist’s emoting. It doesn’t have to be a direct personal experience that you’re writing about, but when you sing it, I need to believe it. And don’t force a specific style! If you don’t write insanely metaphorical lyrics, don’t push it. Be you!

Never. I’m an open book, and at this point in my life, I’ve learned to take responsibility for my errors and own all aspects of myself that have created who I am today. There are a couple of topics that I’ve kept to myself, but I’m warming up to writing about one of them, since it could be helpful for others going through the same thing.

The most meaningful to me is the bridge to “As Luck Would Have It”: You’re the light in me/You’re a part of me/you’re the spark I didn’t know I had/You help me bloom despite my past. That part was inspired by Zach (Duarte, guitarist), and used for our wedding vows.

My grandfather passed away in July 2016, and it hit my whole family really hard. My grandparents were married for 74 years, and seeing my grandma deal with the loss of her soulmate was devastating. They were a great team, and always together. They held each other up when the other was sick, and exemplified the kind of marriage I wanted. I have so many memories of the small things they did for each other that showed me how a partnership of love and respect should be. It broke my heart that my grandpa wasn’t able to be at my wedding, to see me marry the person that I know will be by my side until the very end. “Empty Space” is about losing your soulmate, and dealing with that space in your life that will always be there, that they used to fill.

“Bright Side” was 100% written for Zach. It’s the first “love song” I’ve ever written. I wanted to show people that despite all the anger and sadness I write about (which are real experiences and feelings), that I also have hope and happiness in my life. It’s honestly about how before we started dating, I second-guessed everything, and even tried to talk him out of having feelings for me because I didn’t think he would be able to handle all my ups and downs. I’m so glad he was patient with me, because he has been my saving grace in many ways. Before Zach, I’d given up hope of having the partnership I wanted in life and had resigned myself to being more of a fixture than a muse for someone else. With Zach, every single day I think of how grateful I am to share such deep, incredible love and respect with him.

Do you remember the day you wrote “Vacancies”?

I’m laughing right now, because that song went through so many changes, and was written over a period of weeks, not in one day. We nearly scrapped it at one point, and right as we were about to give up, Zach and I realized changing the key would help immensely. The day we began writing it though, I was incredibly frustrated with my job, and felt like I was living for my job instead of doing what really made me happy. I felt stuck, and I wanted to people who were going through the same thing to listen and think: “Does this actually make me happy? Or am I doing something that I feel like I’m supposed to at the expense of my own happiness?”

Any plans to release a new album?

Of course! We’ll be demoing a couple more songs in late May and heading back to record the full release in late summer. Depending on timing and other details, we’re hoping for a late 2019 release.

What is the best suggestion your producer gave you when working on “Empty Space”?

The best advice period he’s given is to worry more about the take than if it’s perfectly on pitch 100% of the time. As in, give it your all in the performance of the line, because you can’t edit grit, emotion, etc.

Finishing demos before our next tour in July, then back to the studio for the final album tracking before a fall tour. We’re filming another music video at the end of May for potential release before the July tour.