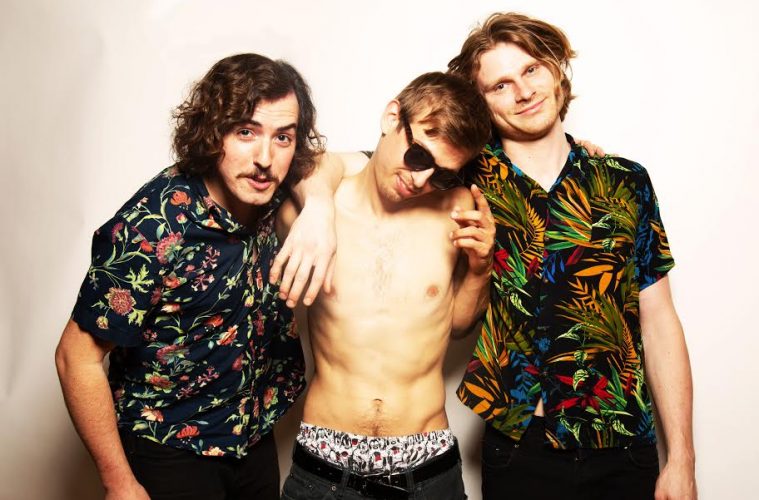 Los Angeles alternative rock trio, Raised on TV is comprised of two brothers and their high school friend. Keaton Rogers (guitar, vocals), Kacey Greenwood (drums) and Ryan Weiss (bass) combine their energetic, driving, and melodic sound, pulling influences from many 60s and 90s rock bands and fuse it all together to make something that is uniquely their own.

Following the release of their debut full length album ‘Season 1,’ which detailed growing up and the journey into adulthood, the band are soon to be releasing their highly anticipated sophomore album ‘Season 2.’ The second instalment of their work, which was completed at Dave Grohl‘s esteemed 606 Studios and Ethan Kaufmann’s Elephant in the Room in Hollywood, focuses on a different stage of life. The band reveal, “It’s beyond adolescence and teen angst. There’s still some angst, but maybe that angst is more adult? Dealing with financial struggles, relationship struggles, losing friends, etc”.

Leading single ‘Soul on Fire’ narrates rediscovering one’s self in the midst of the digital age. “It’s about the fantasy of throwing your cell phone literally out the window, which is one of the lines in the song, and not caring whatsoever, which has become so hard to imagine”. The idea of disconnecting from the internet and all it entails, only to reconnect with your truest self. The idea of letting go of that dependency we now have as human beings to cell phones and the internet. Sonically ‘Soul on Fire’ bursts with adrenaline while maintaining a sense of self-reflection. Built upon multiple layers, the track narrates a traditional and infectious rock feel. The dreamesque verses lead you down a rabbit hole of self-introspection, giving you an insight into what to expect from Season 2.

The authenticity of the band is shown through the use of organic instruments, Rogers reveals, “We wanted the single to sound like we sound in the garage, or on stage, to have that live feel, but to also have that attention to detail”. With influences ranging from the classic rock of the 60s and 70s such as The Beatles, Jimi Hendrix and The Who, to more recent great rock bands like Nirvana, Smashing Pumpkins and Foo Fighters, the three-piece have created a sound of equal capacity. A sound with enough energy and life that can engage crowds and make people move.

Raised on TV have seen success having played numerous festivals and sold-out audiences at tours across the States. They have also opened for established acts such as Jefferson Starship and Marcy Playground. Having garnered notable Spotify playlists and extensive media acclaim, Raised on TV are now gearing up to get back on the road for “The Off the Couch Summer Tour of 2019“, where they will be playing across America and Canada. ‘Soul on Fire’ is currently available worldwide.