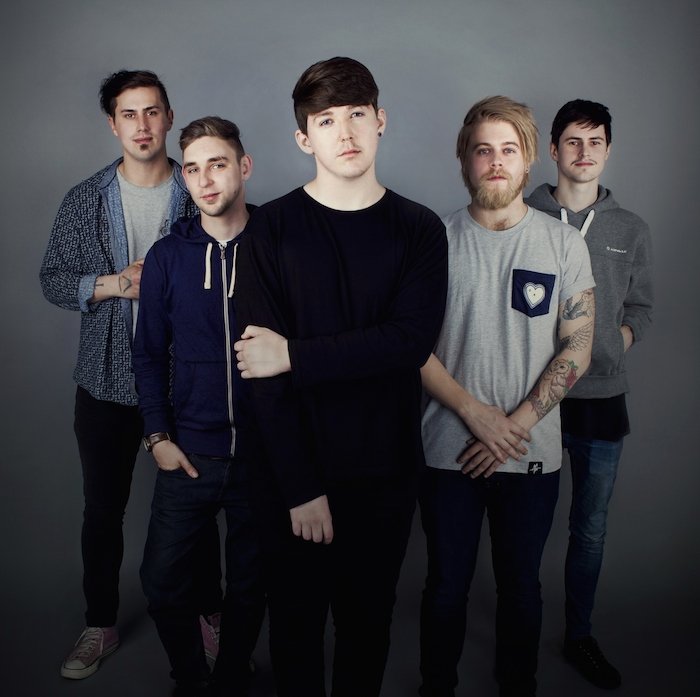 ENIGMA – interview with THEY SAY FALL

RYL: Your last album ‘Enigma’ was released in April last year. Tell us more about it. When you will release a new one?

THEY SAY FALL: Enigma was a milestone in our time as a band because it really signified the moment our connection was cemented. We all felt like we’d found our own sound and it really marks that progression.

We’re writing our next record at the moment, with the intention of releasing it next year, so keep your eyes peeled!

RYL: Let’s talk about the song ‘Red Death’, what does it mean to you?

THEY SAY FALL: We wrote and based the theme of Red Death from the Edgar Allan Poe short story “The Masque Of The Red Death” Brad is a huge fan of his, and finds a lot of inspiration from the macabre and Edgar in general.

The Vincent Price film adaptation was also a direct source of inspiration.

RYL: Is there a common meaning or theme between all your songs?

THEY SAY FALL: Not really, we try to be as broad with our subject matter as possible. We find inspiration in many different areas, so it tends to help keep the songs dynamic.

RYL:  Do you remember the day you wrote ‘Ivy’?

THEY SAY FALL: The song was written about Joe’s late grandma Ivy, as a homage to her and the way Joe felt when she passed.

She died on the very first day of our very first tour, and it was that night that Joe started to work on the lyrics.

She had an incredible impact on the foundations that were laid in the creation and expression of the band early on, giving us a place to practice and supporting our endeavour.

RYL: How do you usually write the lyrics and music of your songs?

THEY SAY FALL: Usually one of us will have a rough idea of a riff or a passage of lyrics, and we’ll just get into our practice space and start smashing something out. Ideally as loudly as possible!

RYL: Which is your favorite rock song, lyrically speaking?

THEY SAY FALL: That’s a really tough question! Rather than list just one, we’ll pick a song each.

RYL: Which of your dreams have you not yet accomplished?

THEY SAY FALL: To tour the USA! Getting to be apart of the Warped Tour would be absolutely incredible!

THEY SAY FALL: “And so my path unfolds, and I am defeated, Livid with desire, The process has completed. Eyes sunken blots, It happens tragically, Lost to a discordant melody.

Don’t want to freeze in time, but the clock has stopped, I claw at the face, that my mind has forgot. Writhing from the floor, to a contorted stance, I am become death, no longer a man.” –

A Satire For The World

THEY SAY FALL: It doesn’t have a name yet, but it’s got a working title, ‘Silly Billy’. Stay tuned for that one too!

RYL: Tell us your tour projects.

THEY SAY FALL: We’re in the middle of booking a tour for November, just before we start to record the new record. We’ve got some exciting things in motion for next year too!

RYL: Your new song is titled ‘Deadlights’, what do the lyrics mean to you?

THEY SAY FALL: Kehn started writing the lyrics about being in the company of people that, initially he thought the world of, who all one by one showed themselves for who they really where.

They made me him really bad about myself, and everything felt like a competition. They were the type of people that would reincarnate themselves over and over just to grab some short lived attention, with no regard for anything or anyone around them.

They had no integrity, and that wasn’t what he wanted for myself. He got out of there, and that’s what ‘Deadlights’ is about, escaping that negativity, and just generally being the bigger person.