EPic – interview with Peter Tuthill – DESPITE

RYL: let’s talk about your new album “EPic” that will be released in january next year; how is its preparation going?

Despite: All preparations are going well. It’s been a long time coming, but now it’s all finally falling into place. 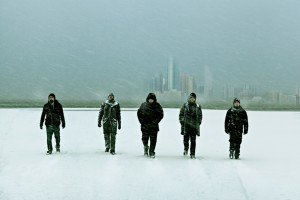 We’re stoked to get this killer out on the UK market, as it seems like the best place to be when it comes to progressive metal nowadays.

We listen to a lot of UK based metal bands and we are widely influenced by them. Bands like Tesseract, Heart of a Coward and Hacktivist are just pure awesomeness!

RYL: Is there a common theme between the lyrics of its songs?

Despite: I do all the lyric writing in Despite. It all depends on what comes to mind at the time of writing the lyrics.

The EPic lyrics touch subjects like religion, inner struggle, brawling, con artists and equality in all living beings. I mostly write about my own feelings and thoughts, along with injustices and wrongs in the world.

RYL: “As you bleed” is the first single released from the album, what is the meaning behind its lyrics?

Despite: Well, this one’s the only track off of EPic that doesn’t touch a subject that I myself can relate to on a personal level.

You see, I’ve never been in a fist fight. I despise everyone who resorts to violence to resolve any problems they come across.

You have a mouth and a set of vocal cords, use them instead! Words are more powerful than fists and weapons any day of the week. I guess you could see the lyrics as just that: Me making fun of that subject, to show it’s shear stupidity.

Make love, not war, damn it!

RYL:  Do you remember how you wrote “Awakening” ?

Despite: Not to the day precisely, but this is a subject that I feel very close to each and every day. The song is about religion.

You don’t need to read more than the first sentence to understand that part. It’s about some people using religion and their beliefs to hurt, kill, rape and maim other people and creatures on this planet. I’m an atheist/agnostic, and I have a hard time understanding and feeling at ease with what’s happening in the world around me.

You don’t have to dig deep into the internet to find videos and pictures of the most horrible stuff that’s going on in the real world.

We are so sheltered from what’s really going on. Media won’t let us see what truly horrible things people do to each other in some parts of the world. I’m not against any religion in particular.

I’m not against peaceful people who use their beliefs to get through rough times, or the everyday struggle to cope with situations in everyday life.

It’s more or less just a “Wake the fuck up!” to the people that misinterpret what they read to use it for bad.

Don’t believe everything you read! Believe in yourself, what you do, your own goals, and the people close to you in life!

Despite: I usually listen to the instrumentals and write what comes to mind when I hear it. Emotions grow strong with the various melodies heard.

Despite: Tough one for sure!

“Why can’t we get along, why do we have to fight? Nobody’s ever seen a belief that’s always right” is one that I’m happy with. Peace, people.. Peace!

RYL: What inspired “Give me life”?

Despite: “Give me Life” is about my everyday struggles with my inner demons. I have a chronic depression due to my recently pinpointed diagnose (Bipolar disorder – type 2).

I’m constantly at war with my own thoughts. I hadn’t gotten the proper diagnose at the time of writing those lyrics, so it’s a really desperate call from a man who doesn’t know why he has a constant war going on inside of him every day. Now I’m on the proper medication, but I still have a long way to go to feel happy about myself.

Maybe I’ll never get to that point, who knows? But at least it feels better when I get some of it off my chest by writing about it.

Music is my best therapy.

Despite: Well, at this time I can’t say much about it, as we’re still trying to fit the final pieces together. We’re planning on doing a tour in the UK in the spring of 2015. Despite’s music is meant to be heard and experienced live! First the UK, then onto the rest of the world!

RYL: Which is the last song you wrote? (not released yet)

Despite: Our new single is called “Chaos Trigger”. It will be out on November 10th. First as a lyric video on our official Youtube channel (www.youtube.com/despiteofficial), and then on November 30th it will be added to all significant online music services, like Spotify, Amazon, iTunes and so on.