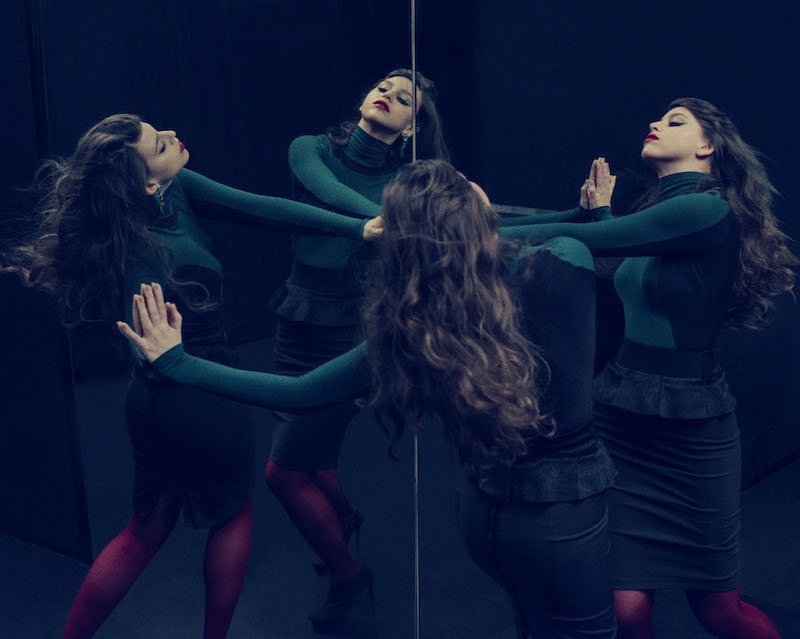 RYL: Your last album “Escapism” was released one year ago, what it means for you lyrically speaking? When the new one?

Fallulah: Yes, it was released in different countries at different times, and there are actually plans to release it in more.

And at the same time I’m working on new music. I like to keep the creative energy flowing. A couple of years ago I had writer’s block for a few months and that was a horrible feeling. So now that the gates are open, I just go with it and write whenever I can.

Lyrically “Escapism” comes from a very private space in me, and I feel like I’ve grown as a writer these past years. I’m able now to be more playful with it, and am beginning to allow myself to put my words into an even broader and more abstract context.

I always know what I’m trying to communicate with my lyrics, but it doesn’t always have to be so obvious to the listener. I like that it leaves room for interpretation.

RYL: We love “Graveyard of Love”, which is the meaning behind this song?

FALLULAH: Thank you. It’s one of my personal faves from the album, but it seems to have gone a bit under the radar for most. It describes the relationship between children and parents.

Not giving too much of my privacy away I can say that I’ve had my own struggles with this, and so has almost everyone I know and have talked about the subject with.

But it’s bitter-sweet because next to the pain there is a lot of love, and it’s a song about finding that balance and moving forward in life.

RYL: Have you any “guilty pleasure” in doing music?

FALLULAH: Not at all. I find it hard to feel guilty about anything music related, because taste is such an individual thing.

A lot of the time people just follow the masses and are dictated by trends. One year saxophones is the most hated instrument, and the next it’s the coolest thing ever because some huge DJ sampled it.

Things like these are so stupid, so I just try to shut out the noise and do whatever makes me feel happy and excited.

RYL: Which was the last song you wrote?

FALLULAH: I wrote one today, but I can’t reveal much since it might go on a new album. But I can say that I had a lot of fun with it. It was quite different from what I’ve written before.

RYL:  Do you remember the day you wrote “13th cigarettes”?

FALLULAH: Very clearly. I wrote it together with Justin Parker, who’s the awesome song-writer who has also cowritten Lana Del Rey’s Video games and Blue Jeans, Rihanna’s Stay and Bat For Lashes’ Laura.

We met up t his apartment in London, where he had a little home studio set up. He had this twangy sound loop, which is in the intro and verses of the song.

He played it for me, and then the melody and words just came to me.

Prior to this I had always written my lyrics with myself as the main characther, but this one turned out to be more like a short story in the shape of a song.

It’s about youth, insecurity and love seen from a young boy and a young girl’s point of view.

I was the storyteller, and my job was to set the scene, describe the emotion and the complexity of these characters in just a few lines.

FALLULAH: It comes to me easily. A lot of the time I hardly notice when an idea comes to me, I just quickly write it into my phone, or onto my note pad. I always travel with pens, and prefer to write on paper.

The idea can be a single word or a single line. An emotion. Other times full verses and choruses appear. It’s very second nature to me, so I feel lucky that way. Since I was very young I’ve enjoyed writing and rhyming.

Something that helps is that I spend a lot of time traveling, which really inspires me. I also read a lot of books and watch a lot of films. Dance in front of the bathroom mirror. And I spend a lot of time on my own. In this solitude I have room for thinking. I’m very much in my own head, which is one of the reasons I called my album “Escapism”.

You can’t and shouldn’t try to run away from problems, but you can dive into your mind for a little while sometimes, and I think that’s what keeps me from going crazy.

FALLULAH: Oh, that’s hard! I’m so smuck that I really like all of the verses I’ve written.

If I had to choose the best verse I’ve written, it’s this one from my song Deserted Homes:

“I don’t know where people go when they desert their homes.

Vaporized like all the water cooked on their stoves.

Maybe time is just two hands leading us through the most.

FALLULAH: Being in a relationship for a number of years, and becoming an adult. You think you’ll be a youngster forever, and suddenly everyone around you starts doing crazy shit like buying houses and having kids.

So I sing about settling down versus being a restless soul. Wanting safety and routine whilst at the same time rejecting it.

Compromising and still feel like you are your own person. It’s a real balancing act.

FALLULAH: I actually don’t have a tour scheduled anytime soon, but I promise there will be one in the horizon. I’m really eager to get out there. Right now I’m just writing.

RYL: Which is the most annoying thing in the music business ?

FALLULAH: If I had to answer this thoroughly I’d take up a lot of space, haha. There are a ton of really annoying things in this business.

There’s something about the music industry that attracts free spirits and big egos, and you can’t accuse the bizz of being super organized and proper.

That being said it’s so valuable being an artist and having so much freedom in your work. I wouldn’t trade that for anything. I’m the boss of me, and all my insane creative ideas can actually become something real and tangible.

At the end of the day nothing beats receiving a touching message from someone who relates to my music, or standing in front an audience who are singing along to the words I’ve come up with in my weird little head closet.