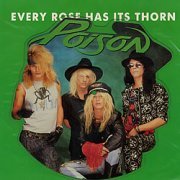 Every Rose has its Thorn – Poison

Released in 1998 as a third single from the very successful album “Open up and say…. Ahh! produced by Tom Werman.

Its sound is a ballad that mix two styles : the classic cowboy/country and the glam metal that always characterised the band.

It is a love song, after that the couple broke up due to the fact that she started to love another man …the lyrics have been written by the all band while, apparently these refer to a real fact that happened to Bret.

It seems that, one day, calling home from a pay phone, he ended up discovering that his girlfriend was together with another man…..

The same night, he started to write the song……..