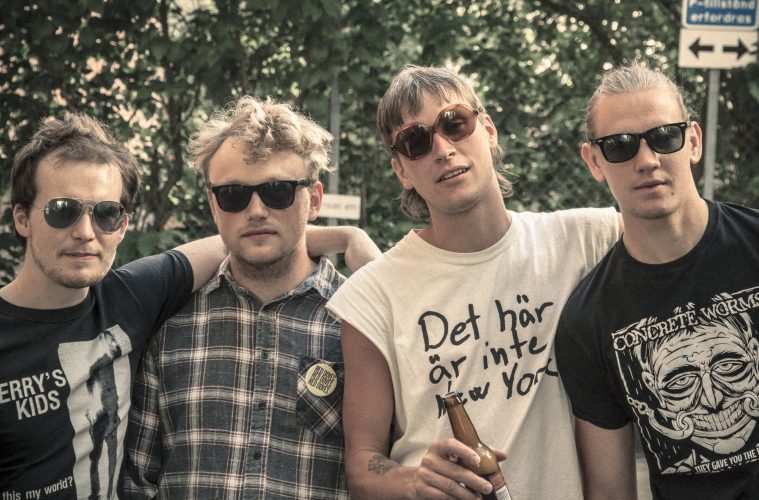 How do you usually write the lyrics of your songs?
I usually do it at home by my kitchen table in a note book. I like to it at night, really late. Sometimes I have a small glass of something strong, like absinthe or something, for what reason I don’t know.

Being true to yourself. If you try to do something else than yourself, it most likely is going to suck. That is for both song writing and lyric writing. Write what you feel and be honest, that’s the key to make something that matters, I think.

Are you ever scared of revealing aspects of your personal life/experience to strangers through your music?
Well, not really. If there’s something I don’t want others to know, I won’t write it, you know? I’m actually being really open with my lyrics, but it doesn’t really matter what others make of that.

What is the best lyric that you ever wrote (the most meaningful for you)?
That’s a really hard question! I think our new album has the best lyrics, by far, I’ve ever written. Take “Trouble Child” for example, it’s about being a person who always gets into trouble somehow, and at the same time trying to be with another person, which can be difficult at times.

What inspired “Lost In Mind” , part of your latest album Fading Into Oblivion?
I think you mean “Lost In Me”. It’s about being lost in yourself, and trying to find your way in this city. Most of the lyrics are heavily inspired by our city, Uppsala, and when I think of this song I think of late nights out, on your way home from a bar, in the dark by yourself, trying to make some kind of sense.

And “Trouble Child”?
As I said before, being a fuck up, I guess.

Do you remember the day you wrote “Unknown Station”?
Not the exact day, but I remember the time and what inspired me. Traveling inspired that song. Me and my girlfriend were talking about just getting on a train and go anywhere. I can’t remember the lyrics right now, but that’s basically what it is.

What was the best moment of your career? And the most difficult one?
Playing shows is overall the best moments. I can’t pick just one moment, because they are so many. But I love being on tour and meeting people and playing shows, it’s the best. Most difficult one, even harder, haha. But maybe when our rehearsal room got flooded last month and destroyed a lot of our shit. Everything that has to do with money is the worst.

What are your plans for 2018?
Touring, playing shows, have a good time.