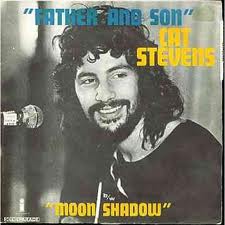 One of the biggest successes of Cat Stevens, Father and Son belongs to the patrimony of rock music.

Released in 1970 as part of the album Tea for the Tillerman, the song was originally written for a musical project call Revolussia and it was related to the story of a young kid that wanted to leave for the war without listening to the suggestion of the father.

The musical was apparently never released and the song toke another meaning, it was all about a young men telling the father that it was time for him to get away and try life by himself.

It is about present and future, old and young generations, fathers and sons relationship.

Cat Stevens told to the press many times that this song was partially inspired by his own life, by the things he learnt from its family even if he said that his father let him do whatever he wanted.

Cat, when he wrote this song was only 22…..obviously he couldn’t think as a father…….

And you? what do you think?