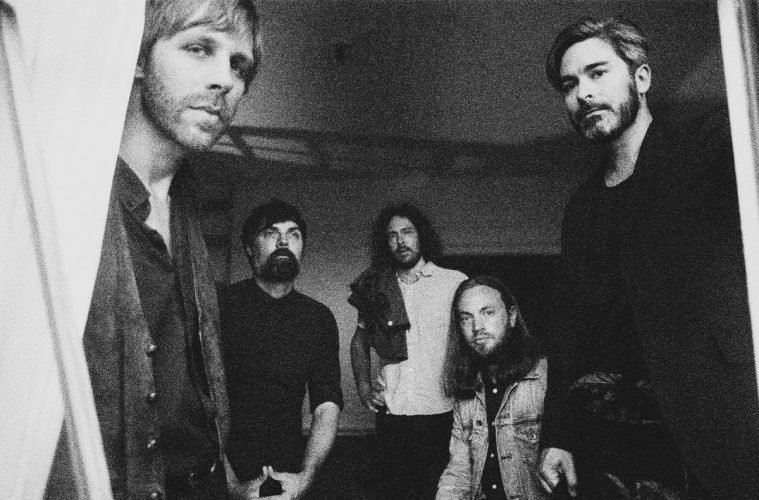 I usually break it down in two phases.

While we’re working out the structure of the song, I’ll pick a title and write placeholder lyrics, stream of conscious-style. Anything goes at this point. It’s just a road map.

Once I’m familiar with the mood and melody, I’ll go about writing to it in a dedicated manner; editing and re-writing until the appropriate feeling is conveyed.

Most songs go through several drafts before reaching the finish line, but more often than not something from that original brainstorm survives.

Conveying a universal emotion. My favourite songs make me feel something, deeply. Words are a powerful conveyor of energy, but the music has to be there as well.

No. I’m interested in writing in a way that blurs the line between truth and myth. The foundation of an idea is often quite personal, but what is constructed around it is never limited to reality. In a way, the mythic portion helps an idea ring more universally true.

The placeholder lyrics for Realm of Light:

“If I can be honest, I don’t know what this song is about, maybe eating breakfast, or a time of self doubt”

Somehow that song survived several rounds of album development before I was able to write the actual lyrics. It became a joke in the band, and everyone still sings this version in practice.

Sometimes patience is the best writing tool. If you keep chipping at the wall, eventually you’ll break through.

What inspired “Warmth of Other Suns”, part of your latest album “Fly Oblivion”?

“Warmth of Other Suns,” is one of the more hopeful songs on the album. It’s inspired by a version of “The Afterlife” that exists, not as a place but as a state of mind.

“Forever” was inspired by awestruck terror of the void. Looking out beyond the multitudes of stars and recognizing how small and inconsequential we are. It’s a lullaby for fit for a nightmare.

Do you remember the day you wrote “Silent Gaze”?

Not specifically. The original demo arrived amid a flurry of other songs during Winter 2018. The structure became more interesting to us as we entered pre-production. The lyrics were entirely re-written and revised until it was time to record the vocals. If it weren’t for that deadline, I’d probably still be working on it.

Yes. The album is a meditation on departure from two perspectives. The Observer and The Voyager.

The songs make up a conversation between a person who has left the world behind, and one who has suffered the loss.

The story is set against the backdrop of the cosmos and bound together by themes of hope, memory, grief, fear, and love.

I had the pleasure of working one-on-one with our producer Jonathan Schenke during the vocal recording session. He suggested we capture whole performances rather than attempting to perfect each line. In doing this, he empowered me to sing with an emotion and confidence that emphasized the intimacy of the lyrical themes.

We’ve spent much of this year developing our live show and we’re very excited about where that is headed. It’s crazy to think we’ve only been together a year.

We’re going to get the music out to as many people as possible, and record the next album before the year is out.