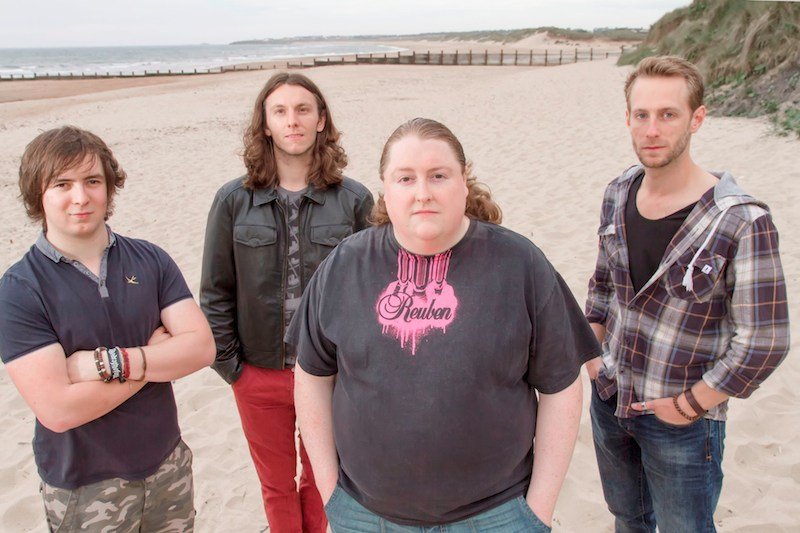 FOOTPRINTS AND EMBERS – INTERVIEW WITH DIGITS

RYL: Your new album titled “Footprints and Embers” will be released on February 2nd, what do you expect will be the reaction of your fans? What this record represents for you?

Digits: (www.digitsmusic.co.uk) Hopefully a positive one! We’ve been playing Dysphoria live now for a while, it actually was just a little too late to be included on the first EP, and Embers & Parachutes have been in and out of our set for some time now.

All 3 go down really well so we’re pretty confident that our fanbase will really like the EP. No one has heard Eros yet, so that is exciting to see how well it’s received; it’s a bit of a deviation from our usual sound, but still sounds like us!

As for what it represents, I suppose it’s a case of progression, growth, going forward and evolving on what we established with Acquiesce To Violence prior to this.

RYL: one of its songs is titled “Dysphoria”….What inspired its lyrics?

Digits: Dysphoria I guess is for people like us. The song is about something I think folk like us experience a lot, I regularly get asked “Do you not want to settle down, work a 9-5 job, have a family and be happy?”… The answer is, no! How is their life any better than mine?

I mean sometimes these people complain constantly about how much they hate their job, their boss, problems with the wife, husband, etc. I mean, I own my own rehearsal studio and music business, I tour with some of my best friends, most of my other friends are in bands, I’ve played with some of my all time heroes, these are all opportunities I’d have missed.

In any case I have my own place, a fiancée and a bairn on the way, I don’t feel like I’m missing out on anything, so Dysphoria is basically about not judging someone else’s life based on it not conforming to your understanding/opinion of how life should be.

Digits: No… Not really. I suppose this EP is more personal for me (Chris), than anyone else in the band, but there isn’t a common theme amongst the songs.

RYL: Do you remember how you wrote “Parachutes” ?

Digits: In the office at the studios at about 2am with an acoustic guitar and my Pc with my phone on record!

Digits: Actually I don’t really have a specific way, although I do always need the tune first. I’ve been writing songs for 14 years and I’ve yet to actually sit down with a pen and paper and write the lyrics before the music, which over the years I’ve been told is the wrong way to do it!

My defence however, is I like the narrative to be led by the tune. I used to sit with a guitar and bang out the verse chords, lyrics, chorus chords, lyrics, and so on and so on, but these days with Digits it’s a mix of that and having a fully formed tune ready first, then, based on how the tune feels, I write the lyrics.

I’m always listening to other music and lots of it to learn new ideas and find inspiration, etc.

Often we’ll jam the tune out together before the lyrics sometimes it’s all written at once like it was with Dysphoria & Parachute.

However after I go and write the lyrics, we jam it out with the band and I may have had an idea to change a part to fit the lyrics, etc so we’ll jam it out some more with the new changes and then one of the lads might say “let’s do this” and possibly add further lyrics as needed. It’s a constant process. Sometimes it’s there first time, but we like our songs to be a little more thought out.

Sometimes a song works just straight off the bat, but our style is very much about progression throughout the song, we like things to drop in and out, the first chorus to be different in some minute way from the second, the verses always changing.

Some of our songs don’t even have choruses!!!

We’re always open to changing things and try not to take it personally or be biased about it. Music is personal after all. But above all we’re honest to eachother on our thoughts in regards to a song or how it should progress.

Funnily enough in previous bands I’ve shared the lyric writing role and I prefer that if I’m honest, as it puts less onus and pressure on me. However with Digits, the lads have never been too interested in writing the lyrics!!

I think Matt is, but he’s not been with us long.

RYL: Tell us everything about “Embers”…

Digits: Embers is only our second tune to be written since we formed at a practice where all 4 members were involved in putting the tune together.

I’m not sure why that’s the case but it is. We actually had the tune for a few months before I finally sussed some lyrics for it.

The song is all about how the world will do just fine without us.

The Earth doesn’t need us, we need it and as it currently stands we only have one! I’m not a massive environmentalist or anything, but I’d like to think that I’m fairly intelligent, enough to know that the argument should not really be whether or not there is currently a global warming event in progress or to what extent it will be, but rather that we should cut down our reliance on fossil fuels and pollutants regardless, it’s finite, very finite and we know for certain it poisons the environment and people.

I can’t see a bigger argument. At the end of the day, even if we pollute the Earth, life and Earth will go on and survive, even flourish, we probably won’t. You only need to look at Chernobyl to know something will survive and it won’t be us!

RYL: who produced your new EP?

Digits: Craig (guitarist) did! I have the rehearsal rooms, he owns the recording equipment. We think he’s pretty good at it and it helps keep costs down allowing us more freedom to finance other areas, so it’s pretty much a perfect situation!

Digits: Well it kicks off with us doing a headline show on the 17th of January at Newcastle’s O2 Academy 2. It’s a nice little venue and there’s always a great vibe when we play there. We normally like to finish with the

O2 as a home town show, but this just happens to be how it ended up. After that we’ve got 5 days on the road in January where we’re going to Doncaster, London and a couple of other places before finishing at Lomax in Liverpool which is one of our favourite venues.

We’ll then take a short pause until the EP comes out on Feb 2nd and then from Feb 13th we’re back on the road to Glasgow, Manchester, Chester, Workington, Middlesbrough, etc before finishing at The Cluny in Newcastle on Feb 28th!

We’re really looking forward to it as it’ll be our first big tour with Matt and it takes us to some of our favourite cities!

Digits: On this EP, it would be Eros; it was a late addition to the record.

As for unpublished, we have been working on new material, which will be Matt’s first involvement with the band as far as writing. That song is called Braggart, which should hopefully be on the next release, which we’re already working on, now! I used to know the guys from Don Broco from when I was in a previous band with Stu (our bassist) and they had a song called “Watcha Gonna Do”, so this song was kinda inspired by that. I felt the tune had a bit of a sexy, suave, chauvinistic drive to it, so it’s all about people going out with the intention of getting drunk and laid I suppose. You know the type, they’re cocky, arrogant, the lads are a bit dickish, the girls are all bitchy.

Your Geordie Shore type! Newcastle is full of ‘em at the moment!

Digits: Eros was the Grecian god of love. My sister in law is gay; I’ve got a few friends who are gay or transgendered. Like I said earlier, I’m not really politically motivated, like I have friends who are massively political, I have opinions, but I don’t feel like I am who I am based on my political stance or whatever. I think what you do in life says more about you than just thinking it.

I feel the same about others; who they love, how they feel, etc, doesn’t make who they are, and so they shouldn’t be judged as such.

I don’t buy that just because someone wrote it down a few thousand years ago that gay people shouldn’t get married, and if someone doesn’t feel themselves in their body it’s their choice to have a sex change.

One of my friends has had a rough time going through a sex change, specifically with their parents, on top of that a few people I used to think highly of revealed themselves to be pretty closed minded and hateful.

When you find out someone you thought was a good earnest person is a member of the EDL and sporting extremely anti-islamic opinions, it really takes you by surprise.