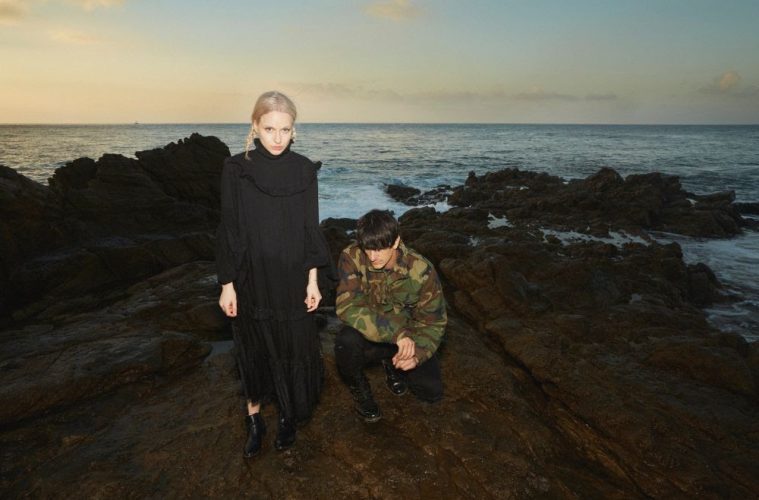 Funeral Pop I – Interview with mxms

It’s different for every song.  A lot of times Jeremy will start the lyric and we will finish it together; and on several songs we will dive auto-biographically into a story.  Like for instance “Gravedigger” was a title Ariel came up with and we focused a story around actual events.

The melody first and the lyric second.  Third the drums.   We believe songs should hypnotize you with the melody, intrigue you with a story, and your head should never stop moving.  If popular music had 3/3 consistently we would be in the middle of a musical Renaissance like most decades previous have had.  Its going to happen again maybe any day now (glass half full).

Probably our song “RX”.  It’s just so true and so real life for us.  We have some new music coming in the fall that we are in love with and can’t wait to release.

What inspired “Gravedigger”, part of your latest EP “Funeral Pop I”?
‘Gravedigger‘ was inspired by Ariel jumping into the dating scene in Los Angeles after dating someone since high school.  She had no idea that “hey do you want to come see my studio” meant something very different than just possibly working on music.  Time after time she would meet someone at a bar or club and literally an hour later a penis would appear on her phone.  So we came up with a story about what it would be like if she snapped and got in a hearse and drove around and found all these boys and buried and/or burned them alive.  She would become the ‘Grave Digger’.

‘Salvation Hurts‘ is a song written about how the religious “salvation” that was shoved down our throats as children turned out to be based on fear of dying. If you truly aren’t afraid of death then you don’t need a silly story to cling onto for a magical land full of bearded white ppl when your body gives out.  That’s just my experience other ppl don’t have the same experience and are happy and not a garbage person.   The song deep dives into the idea that walking through pain and discomfort, hurt and trauma is actually the salvation.  Walking through the fire to get to the other side makes the next fire not so hot.

Do you remember the day you wrote “Paris”?

Absolutely.  We were talking to a dance music duo called “AndHim” and we got excited to write something that they could remix into a sick club track.   We wrote the song in like 2 days and ended up just keeping it and using it for MXMS because it felt right.  Paris is a true story about an experience Ariel had when she lived in Paris going to school.

‘Funeral Pop I‘ is the first of probably 2 EPs. The theme we follow is directly lighting the feelings, trauma and the struggles we go through as two artists with mental health and addiction issues.  We find time for love and for satire too because we can’t take ourselves or anything or anyone too seriously or that will be counter productive to the creative process and to our serenity.

We produce all of our music ourselves 🙂  Also very proud of this and also it takes SO LONG to finish songs though.  If we could become a third person we would suggest to ourselves to not take 5 weeks to finish a track.

We are on the road literally most of the year.   Currently on tour with She Wants Revenge who are the most amazing guys we have ever toured with.  So down to earth and supportive.   In July we are finishing up ‘Funeral Pop II‘ then we leave again in August for a while, then we go to Europe and the UK around Halloween then another US/Canada run.   We love the gypsy life.