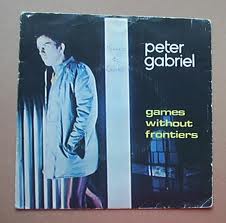 Who does remember a TV broadcast of 1970andsomething called Jeux Sans Frontieres (games without frontiers)?

We do believe very few of you really do……unless you are already turned 40 and, during those years, you had a lot of time to throw away…..

The show was just a sport competition between countries that were challenging each other in order to win the trophy.

Despite a “healthy” competition,nationalism was very strong, a clear example of the old rivalry between European nations.

As Peter Gabriel is saying in the song: ” Games without frontiers” is like “War without tears” …..there are no wars without them unfortunately.

Peter wrote this song in 1979, but in its verses the nations are not represented by teams like in the tv show.

Hitler, Chiang Ching,Lin Tai Yu, Enrico Fermi, Sacha (that represents Russia) and Britt ( that represents Great Britain) are all protagonists of the song…..because of them the world suffered and had to deal with wars, much more dangerous than games.