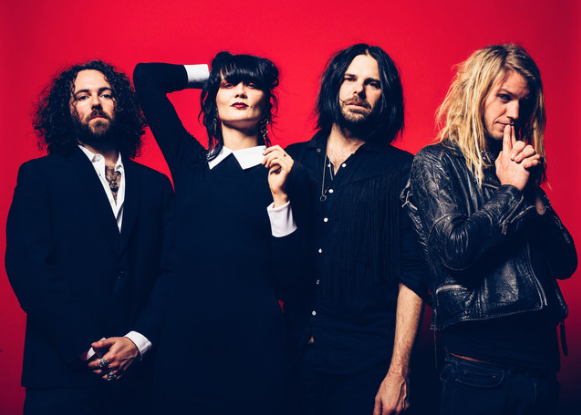 Following the announcement of a UK headline tour for October, rising garage-rock four piece Saint Agnes release ‘Move Like A Ghost’, the latest offering from their debut album ‘Welcome To Silvertown’, out May 3rd via Death Or Glory Gang Records.

The groups previous single, ‘Welcome To Silvertown‘ – self released on Death Or Glory Gang Records – certainly wet the appetite of fans, marking their first track to surpass 1 million streams on Spotify. Now, the eagerly anticipated UK tour will see the group take their raucous live show to Manchester, Glasgow, Edinburgh, Liverpool, Sheffield, and London’s Dingwalls on October 24th, marking their largest headline show in the city to date.

A live favourite, ‘Move Like A Ghost’ sees psychedelic organ tones and howling riffs collide atop a thunderous rhythm section. Speaking of the track’s muse, the band said, “we talk to ourselves all the time and tend to be harder on ourselves than any stranger would be. The ghost in this song is a manifestation of the voice that highlights your worst insecurities and deepest fears and dances around you, accompanying you through everything you do”.

Self-produced, and engineered by Luke Oldfield (The Wytches, Uncle Acid & The Deadbeats), Saint Agnes’ debut album captures true rebel heart and energy. Musically unshackled and ferocious in its intensity, ‘Welcome To Silvertown’ fuses menacing, frenzied rock with dark anthemic flare. Born in a dingy sub-zero flat, the album is rife with themes of wild fantasy, escapism, emotional fragility and the inside-outs of living in East London’s district of Silvertown. Now in 2019, the gates of Saint Agnes’s quasi-fictional sin city are flung open.

Consisting of Kitty Austen (Vocals/Guitar/Keys), Jon James Tufnell (Vocals/Guitar), Ben Chernett (Bass) and Andy Head (Drums) – Saint Agnes have clocked up over 200 shows across the UK & Europe already. 2018 saw the band play the mainstage at Kendal Calling, receive radio support from Tom Robinson (BBC 6 Music) and John Kennedy (Radio X), as well as festival appearances across Europe and sold out headline shows at The Lexington, The Monarch and Borderline in London. October will see the group take on Dingwalls, their biggest headline show in London to date.

Tickets for their October tour are available HERE.