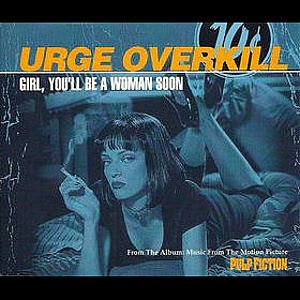 Girl, you will be a woman soon

In the panorama of alternative bands from Chicago, Urge Overkill is without any doubts, the one that had the most success, especially because of their cover of a song of Neil Diamond ( for the ones of you that don’t know Neil – impossible but, it can happen – he is the most important lyricist and he sold over 150.000.000 copies of his albums).

The song “Girl you will be a Woman Soon” was included in the soundtrack of one of the most important movie of all times “Pulp Fiction” by Quentin Tarantino.

Their name comes from a song called “Funkentelechy” made by the funk/rock band Parliament.

During their career they released 5 studio albums, the last one dated 2011 and called “Rock n Roll Submarine”.

The song talks about the commitment of a man that ask a girl to become a woman (become his wife).

She doesn’t know what to do and people around her are trying to convince her that he is not the right man for her.

We don’t know if he was able to get her at the end; if we have to look at the life of Neil Diamond, exactly in 1967 he broke up with his first wife…..