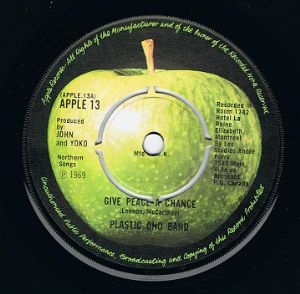 Give Peace A Chance

Recently he would have celebrated his 72th birthday….while he died only at the age of 40.

He was not only the singer of the most famous band in the world but also the author of many lyrics that have been written by him.

Today we go back to the 1969…. 33 years a go….the year of the war in Vietnam, the rebellious year for a youth generation that wanted the peace and the freedom while the world seemed to go in a totally opposite direction.

In USA especially, a lot of young men have been obliged to fight in Vietnam, to leave their families, their houses, their loves….all this in order to fight for something that they didn’t even know.

John Lennon was politically active in USA and these were the years of the wedding with Yoko Ono and of the very famous “Bed In”… do you remember?

Most probably you have seen some pictures of them under the bed sheets smiling and talking with the journalists that were coming from all the parts of the world about PEACE , LOVE and JUSTICE.

The first BED IN was in Amsterdam, the second one in Canada; and in Canada something happened, a journalist asked to John: “why you are doing all this?” and he replied ” All we are doing is just to give peace a chance “.

John loved this phrase a lot and continued to repeat the same during the following days till he decided to ask for a 4-track recorder and he invited several friends to sing together with him in the hotel room.

John, with his acoustic guitar, was playing and singing with them…. GIVE PEACE A CHANCE become rapidly an international success and reached the top ten in the US, UK Charts