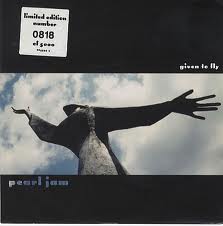 Given to Fly – Pearl Jam

Given to fly is one of the most known songs of Pearl Jam, written by Eddie Wedder and Mike McCready in 1998 and released together with the album Yield.

The song is, both musically and lyrically, inspired by the sense of freedom and liberty despite bad thing can happen along the way.

Musically Mike described the song as an ocean, it starts slow but then becomes bigger and bigger; it is the same lyrically,, the desire to fly above all and above all problems, where, as the horizon, there is no limit.

The song is about try to be free and not to have any limitation despite the society and the life trie to knock you down.

In an interview Eddie said that he wanted this song to be like a fable, and, as for all the fables, there is, at the end, a learning….