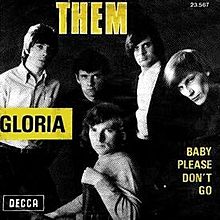 The story of THEM lasted only two years, from 1964 till 1966, the moment when Van Morrison decided to quit the band and to start a solo career.

Did you know that The Doors have taken a lot of inspiration from Them? It was because of their sound between blues and “garage rock”.

They were part of what is called the British Invasion of artists in USA (among others Beatles, Stones, The Who….)

They released two albums that reached straight away an enormous success; the first one called “ The angry young Them” of 1965 and the second one “Them Again” of 1966.

One of their most important success was the hit “Gloria” written by Van Morrison only at the age of 18 , the lyrics are talking about love and passion between young lovers.

The song entered in the history of rock and roll, there is an infinite list of covers available: The Doors, U2, AC/DC. Patty Smith, Bon Jovi, R.E.M. , Grateful Dead and many more.

Will you shout G-L-O-R-I-A all day with us? we love the AC/DC version