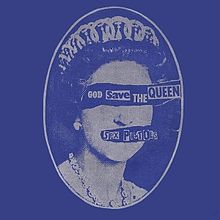 God Save the Queen

Today we feel really punk, so we want to celebrate with a song made by the most famous Punk Rock Band of the world…. The Sex Pistols (together of course with Clash and Ramones).

Do it yourself! That’s the way most of the band were doing things…..usually not supported by the music system since they were too independent, too crazy, too against the system.

Sex Pistols have been created in London in 1975 and formed by the vocalist Johnny Rotten, guitarist Steve Jones, drummer Paul Cook and bassist Glen Matlock that will be replaced by Sid Vicious in early 1977.

The spirit of anarchy characterized this band since the beginning …………even in 2006, when the band was inducted in the rock and roll hall of fame,  they refused to participate to the ceremony…they called it “a piss stain”…. Amazingly strong even after 30 years!.

Everybody knows about Sex Pistols, if they don’t know who they really are (or what they did) at least they know their name……….did you know that the band was together only for 3 years??

Johnny Rotten decided to leave the band in 1978 after a leg of their USA tour…….. the band did several reunions later in the years but nothing was like before.

Sid Vicious died one year later of an overdose of heroin in February 1979…. The heroin was bought…by his mother! .

Later , in a letter found in his jacket, Sid said that he wanted to suicide and he wanted to be buried in the same cemetery of Nancy (his former girlfriend that died in the Chelsea Hotel of NY apparently stabbed by Sid)

“God Save the Queen” is one of the most iconic and famous song of the Sex Pistols, is part of their studio album “Never Mind the Bollocks” (did you know that it means STOP SAYING BULLSHIT? ) released in 1977 by Virgin Records.

The song was released during the silver jubilee of Queen Elizabeth II even if the band said that there was no correlation between the two things.

They just wanted to create a punk anthem for the people of England , the working class that is contra posed with the Monarchy.

On 7 June 1977 the band attempted to play the song from a boat named The Queen Elizabeth on the River Thames………..as you can imagine, it didn’t go well.

The radios refused to play the song, they were trying to sabotage the Sex Pistols that didn’t care at all about it …………. Anyway, there was “no future” as the band says in the lyrics of the song.