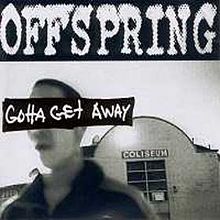 We had an opportunity to see them live in Los Angeles last summer unfortunately we didn’t had a camera with us to report to you the amazing gig that they did during the Sunset Strip Music Festival.

If you never been to the SSMF you should book your trip next august to LA, across the years we saw Slash, Offspring, Bush, Bad Religion, The Doors, Marylyn Manson, Steve Aoki, Motely Crue, Public Enemy, Dead Sara and many more….

1984, that was the year of the cration of The Offspring by Dexter Holland (singer and guitar), Noodles (lead guitar), Pete Parada (drums) and Greg K. (bassist)

Their music is a mix between alternative, Punk Rock, Ska, Pop Punk , their first album is dated 1989 and is titled “Offspring” and it is published by an indipendent label Nitro/Epitaph label, the one that will accompany the band till the release of their best selling album named “Smash” of 1994 that sold over 16.000.000 copies itself.

After this album the band was produced by Colombia Records.

Gotta Get Away is a song part of Smash, it has been released as a third single and the lyrics are  talking about  Dexter’s paranoia and about the fact that he had been pushed to write new lyrics to complete the album and this is driving him mad.