Greensky Bluegrass, who are currently gearing up to release their 7th studio album ‘All For Money’ on January 18th, delighted fans by announcing their extended return to the legendary Red Rocks Amphitheatre. The band will return to the venue for a three night engagement on September 13th, 14th, and 15th- with acts The Lil Smokies, Rayland Baxter, and Billy Strings opening each night respectively. Tickets for the 2019 dates are available now; PRESS HERE for details and to purchase. 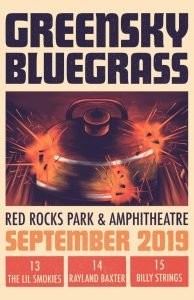 ‘All For Money’ will be released via the band’s own label, Big Blue Zoo Records. The set of 12 new songs was recorded at Echo Mountain Recording in Asheville, NC alongside co-producers Dominic John Davis (Jack White’s longtime bassist) and Glenn Brown. After 18 years together, up to 175 shows per year, nearly 1,000 different setlists, six studio albums and a litany of live releases, Greensky Bluegrass embodies more than just music for its members, and the irony of the album title highlights the band’s own sense of humor. All that said, this album might just be their best yet.

Prior to Red Rocks, the band will be kicking off their Winter Tour with special guests Circles Around The Sun, Billy Strings and Cris Jacobs Band on January 10th. Stops include famed venues such as: The Ryman Auditorium, The Beacon Theatre, The Anthem, The Tabernacle and more. Even sooner, the iconic Riviera Theatre in Chicago will play host to the band’s four night NYE residency December 28th-31st. For ticket info and a list of all upcoming dates, please visit greenskybluegrass.com.