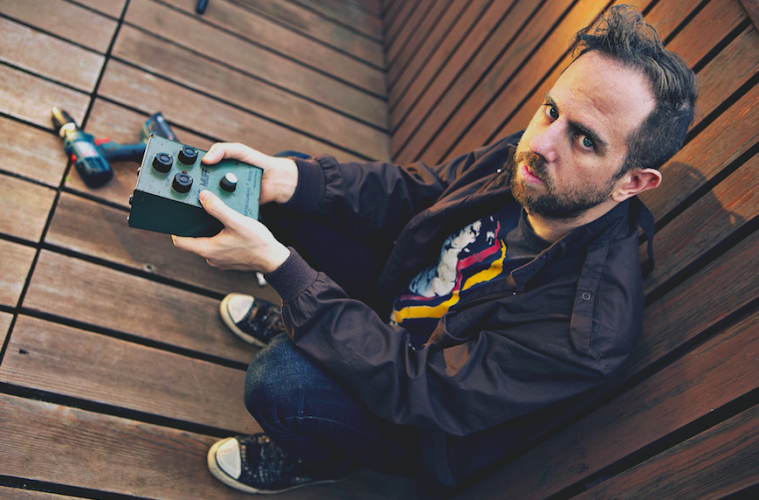 How do you usually write the lyrics of your songs?
It usually starts with either a certain feeling that will trigger words or a certain sentence the will come to mind and then trigger a feeling.
That’ll be the core of the song and it’s the easier part of the process. I will write down the idea and then try to figure out what exactly I’m trying to say, what kind of emotion I’m trying to convey and what words will I choose to do it. This is the more painful part of the process as it’s full of endless amount of self-criticism, search and dissatisfaction until you feel that the feeling that you had and the choice of words to convey it are aligned.

In your opinion, what is the most important thing in songwriting?
I don’t really know. When I hear a song, it either hits me or not. What makes it “work” on me? I have no clue.

Are you ever scared of revealing aspects of your personal life/experience to strangers through your music?
Of course. But then, the reason I write is to be able to put very personal feelings that I feel like are unique into a tangible thing such as words so, at the same time, it’s inevitable. You have to take a chance and put yourself in bit of a risk.

What is the best lyric that you ever wrote (the most meaningful for you)?
For me it’s about timing. I don’t have one favorite lyric. Normally the most meaningful would be the latest that I wrote (I’m not referring to anything specific) as it’s the most relevant to me at that point of time. Sometimes older songs of mine will have a 2nd wave. The gap between when they were written and everything in between that and now will put them in a new context and give them a new meaning to me.

What inspired “Last Bus”, part of your debut album “Habitual Eater”?
I was thinking about all the nights I had that seemed potentially amazing in foresight but were an absolute disaster at hindsight.

Do you remember the day you created “She’s No Pressure”?
Yes. Well, kinda. I didn’t write the lyrics in a day but I remember the day I finalized melody and lyrics. I immediately recorded a quick demo at home. I was listening to it and it was raining outside and I felt good about finishing this one. It was a good moment.

Is there a link/a common theme among the songs of the new album?
Well, other than the obvious things that make an album (style, choice of instrumentation etc.) –  I was trying to write in a way that felt honest to me while still bringing a new feeling or idea to the table. On each side of the honesty meter there are risks – too honest could mean indifferent or boring. Not honest enough can end up being pretentious. I was looking for the sweet spot.

What is the best suggestion your producer gave you?
I produced the album myself which is not an easy process. I also work as a producer and I find it much much easier to produce someone else’s album than you own  (“you’re your worst critic” and all that jazz). I had to keep telling myself to “stop second guessing yourself. stop doubting”.  I had and still have to remind myself that daily.

What are your plans for 2019?
The album is coming out and I’ll be playing shows and spreading the music as much as possible. Then, go back to exploration and experimentation.

To conclude the interview a short Q/A session, please answer the first thing that comes to your mind:
•    Define in one word your album “Habitual Eater”: Resistance.
•    The best show you ever played: Can’t pick one, sorry.
•    The one thing that you must have in your backstage: Don’t really need much. A lot of the times there’s not even a backstage.
•    The soundtrack of your childhood: My sister’s and parents’ records – Joni Mitchell, Tom Waits, Leonard Cohen, Vangelis, Simon & Garfunkel, Israeli Music.
•    Your favorite song lyrically speaking, but not written by you: Can’t really choose one. Early Lou Reed/ Velvet and Bowie stuff. Also These Days by Jackson Browne which I mainly know Nico’s version. Simple but incredibly powerful. I hear that he wrote it when he was 16. Like, what the hell? That’s cruel, man.
•    Last question is “unusual”, we want to know your best relationship advice: Hmmm…Check your self. Constantly. Because taking things for granted is the human nature. You get used to something great and then think it’s not that great and it turns destructive. And be honest with yourself and with your choice of a partner. Are you with a person because of what the concept they represent in your mind (how pretty they are, how smart etc.) or because this is who you really want to be with.