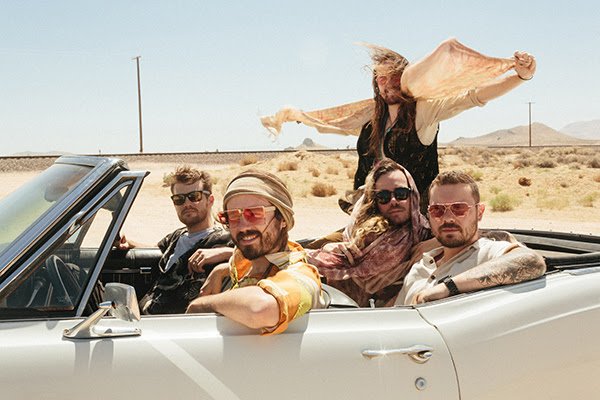 Hands Like Houses have dropped the official music video for their fan-favorite track “Sick”. The video perfectly captures the Australian rockers’ fun and free energy as they zip through the desert while adding in the infectious live presence they have when performing. Vocalist Trenton Woodley has previously said this is one of his top tracks on the album and is equally happy with the music video, sharing: “We had a blast shooting this video – just cruising around the Mojave in a sick old convertible. It was a great day – super chill, and I even left a little piece of myself there… My favourite tambourine in the world broke on set. I’m building a new one with some of the parts, but it broke my heart to carry it home in pieces. Sometimes you pay the price for a rad as hell music video“. Fans can check out the train, iconic tambourine and more in the video.

“Sick” is the 4th single from their recent album, “-Anon.”, which was released last Fall via Hopeless Records. Produced by Colin Brittain (Papa Roach, 5 Seconds of Summer and One OK Rock), “-Anon.” takes the unique sound Hands Like Houses have been cultivating over the past 10 years and injects it with a big dose of fresh, modern rock’n’roll. The most charismatic album of their career, their fourth record marries who Hands Like Houses are as individuals into an assured yet fun collection of songs that begs the audience to take a deeper listen. “-Anon.” is available for purchase and streaming here.

On the track, Woodley continues by sharing: “I think everyone knows the feeling of being taken advantage of – especially when you put yourself out there for someone, to have them want more, without even properly acknowledging what you gave them in the first place. Sometimes you can walk away, and other times you just have to take it in your stride because you’re focused on something bigger. Entitlement is bullshit, but that’s when you have to remember, with a wry grin, that other people don’t control you”.

After heavy touring with bands such as Bring Me The Horizon, A Day To Remember, Beartooth, and Pierce The Veil, Hands Like Houses embarked on a headlining tour supporting the new album in the US with support from Emarosa. They are currently headlining their biggest rooms ever in Australia and will be hitting the road in the US again in Spring 2019.

Over the last few months, the band has seen incredible success worldwide with impressive radio and streaming playlist adds with “Monster” landing a #1 spot on SiriusXM’s Octane channel, bringing in over 1 Million streams on Spotify and garnering a coveted add to Apple Music’s A-List: Hard Rock playlist. The single has also been chosen as the official theme song for WWE’s pay-per-view the “Super Show-Down” and has also been heard on Monday Night Football.