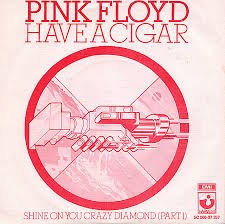 Have a Cigar – Pink Floyd

Have A Cigar might not be the most popular song of Pink Floyd, but it is very particular for two reasons.

Written in 1975 by Roger Water, the song has been released in the album Wish You Were Here.

The first particularity is that is one of the two songs of the band that had as a singer an external person, in this case the folk singer Roy Harper.

Roy was just working in a studio very close to the one of Pink Floyd and it has been invited by Waters to join the band for a recording day.

The second particularity is the fact that the song directly attacks the music executives/ music business.

These are greedy and full of hypocrisy…….. They are trying to get as much as possible from the band without even knowing them.