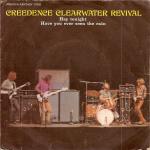 Have you ever seen the rain

If we will ask you to find a correlation between an old friend a commercial of a well-known beer and a promise of commitment……what are you going to answer us?

Most probably you will never be able to answer (and this applies to us as well , don’t worry) that the name Creedence Clearwater Revival comes exactly from it.

CREDENCE Newball , a Tom Fogerty friend, CLEARWATER from a tv-spot of the Olympia beer and REVIVAL that is a promise of commitment to the band.

The band was formed in California back in 1967 by four members: the two Fogerty brothers (John and Tom – John vocalist and lead guitar and John rhythm guitar) , Doug Clifford (drums) and the bassist Stu Cook.

Their sound is going back to the roots of Rock N Roll, a mix of blues, soul , country and southern rock (the one that is used to play in Mississippi).

The success of the band is huge, despite the fact that they didn’t had a long career; they “lasted”  only five years, till 1972 when the band decided to spread out because of problems between its members and also because a not-really- successful album : “Mardi Gras”.

One of the most important moment of their career was the participation to the 1969 Music and Art festival of Woodstock.

John started to tour alone since then and he released several albums, the last one is planned in 2013 and it should have as title “Wrote a song for everyone” that , most probably, will have cooperation of different artists, among them Foo Fighters.

We are all waiting to see how it will sound like, but we are sure it will be a success!

“Have you ever seen the rain?” is part of the album Pendulum , it has been released during the late 1970.

Its lyrics have different interpretations; a political song that is referring to the Vietnam War, a reaction to the Altamont free rock concert happenings (remember the assassination during the Rolling Stones concert?) or simply about the problems of a band that started to have some problems between its members.