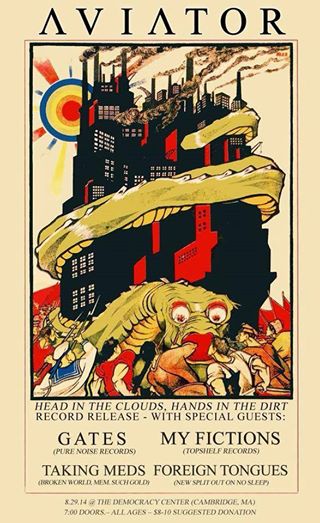 Head in the Cloud, Hands in the Dirt – Aviator – interview with Mike Moschetto

Mike Moschetto, bassist of Aviator (http://aviatorma.com), answers to our questions regarding the new album and lyrics

RYL: Your album “Head in the Clouds, Hands in the Dirt” has just been released, how do you feel about it? How do you expect the reaction of your fans will be?

MIKE MOSCHETTO : The album really feels like an achievement to us – as songwriters, musicians and recording/mix engineers. It’s been a fairly gradual process of finding our “voice” in the five years since we formed, so hopefully longtime followers of our band see it as some culmination of our growing pains.

And I think by taking some leaps and fusing many disparate influences together, it’s something that new listeners will find familiar and enjoyable at first, then uniquely “us” upon repeated listens.

MM: Probably “Pipe Dreams” – it’s one of the more difficult ones, but when we pull it off it’s really gratifying.

MM: The only deliberate instance of this is how “Fever Dreams” (the album closer) calls back to “Pipe Dreams” (the opening track). Other than that, there are a few overlapping themes between songs based on who wrote them.

TJ [Copello, vocalist] wrote more of the introspective, relationship-based songs because he was going through a rough time. My lyrics come from the things that keep me up at night – the unrelenting passage of time, loss of agency, would’ve/could’ve/should’ve stuff…

MM: The music nearly always comes first, so that shapes how we approach writing lyrics. But in any situation, the whole band meets to edit and revise them before we settle on anything.

TJ will sometimes free-write independently of the music – journal style – and we’ve ended up chiseling his blocks of text into a proper lyrical structure, but often he’ll bring us lots of established lines, verses & choruses that just need minor touchups for the sake of semantics, clarity or delivery, or all three.

On my end, when I go to write lyrics I try to listen to what the rhythms, chords & dynamics of the song are saying and let things fall into place from there. I come up with vocal cadences, patterns and melodies first, then try to write lyrics to fit them, so I have a good idea of what it’ll sound like before I know what the words are.

This leads to a lot of self-editing in my process, but it all ends up scrutinized by the rest of the band just the same.

MM: For me, the day we recorded the violin & cello parts for “Forms (les feuilles mortes)” was especially fulfilling.

Our players came in and nailed the arrangement pretty quickly, so in just a few hours we suddenly had this beautiful string section filling out a song of which we were already very proud.

RYL: Tell us everything about the song “Head Noise”, it seems to be the fan favorite…

MM: “Head Noise” was the last song we wrote for the album before starting to record it. We sequenced the other 9 tunes, listened through them and thought, “Man…we just need a faster one in there somewhere.”

Musically, we wrote most of the song on our friend Yvonne’s front porch in Bethlehem, PA before a show we were playing there. Lyrics came later when TJ’s sadness gave way to spite & anger, which seemed to fit the vibe of the song.

If I recall correctly, we got together to workshop and demo his vocals the same day he wrote the words.

RYL: Do you remember the day you wrote “Bipolar Vortex”? We loved it!

MM: Glad you dig! I believe Michael [Russo, guitar] came to practice with that opening guitar part and we just jammed on it from there, experimenting with adding guitar layers and eventually recycling the chord changes from a demo we’d scrapped to form the second half of the song.

Once lyrics & vocals got figured out, it really came together for us. I guess I was having second thoughts about it because it’s a slower, moodier track, but TJ’s performance for the ending really sealed the deal for me.

MM: We actually JUST got home late last night/early this morning from a 10-day record release tour in the northeastern US. But in exactly a month from the time of writing, we’ll be hitting the road for all of October on No Sleep Records’ first ever “Death To False Music Tour,” for which we’re incredibly excited.

We get to play a lot of new places with a lot of cool bands and we’re thankful that No Sleep asked us to be part of it.

MM: Man, I’m tough on myself when it comes to lyrics. But I’m still really proud of the titular line of “Weathervane” (“I should be a feather floating on the breeze, but I’m a weathervane; I only point to where I want to be”).

I think the midsection of “Fever Dreams” came out really cool as well. As far as TJ’s songs, the line toward the end of the bridge of “There Was A Light” floored me when I first read it (“and though I’ve not completely lost faith in the Lord, I wish He’d show me the light or show me to the door“).

And the end of “…But I Won’t Be There” is strong enough that it gave the album its title, so that’s an important part too.

RYL: Tell us about “Pipe Dreams”, what inspired it?

MM: I tend to just say “Pipe Dreams” is about getting older, and while that’s technically true and I did write it with my 25th birthday on the horizon, it’s more complicated than that.

It’s about waking up one day and realizing you’re not a kid anymore, you don’t have your whole life ahead of you and feeling like it may be too late to become the person you’d wanted to be, either because you were too busy working or going to school or generally succumbing to pressure from your parents, your boss, society at large, whatever.

It’s about the little “devil” version of yourself standing on your shoulder telling you to sacrifice a potentially stable life to go out on tour with your punk band because that’s what brings you joy and makes you feel truly alive, even if only for 20 minutes a night.