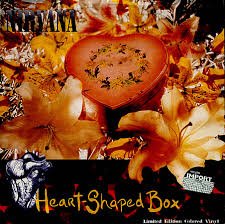 Hearth Shaped Box was released together with the album “In Utero” in 1993 as first single.

Initially titled by Kurt as “Hearth Shaped Coffin” the song changed in to “Hearth Shaped Box” inspired, it seems, by a box gifted by Courtney to him.

The interpretations of the lyrics of the song are multiple, here some of them:

Kurt apparently said that the song was inspired by watching documentary on children affected by cancer, something very sad, hence the verse “I wish I could eat your cancer when you turn black”.

Courtney said that the lyrics were inspired by her vagina, especially on the part that says: “Meat eating orchids forgive no one just yet … broken hymen of your Highness, I’m left back…”

Critics are saying that Kurt once again talks about his endless relationship with media “Hey! Wait! I’ve got a new complaint”

Looking at the verses of the song we think the song has multiple meanings, all the three version are possible and we don’t excludes more are hidden in the song.

We know that, writing the lyrics was not a easy task for Kurt, maybe he decided to group several topics that he had in his mind…. what do you think?