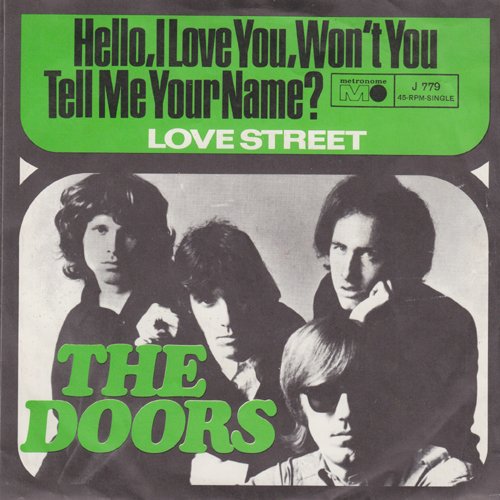 Hello I love you

Venice Beach, Los Angeles, California…….try to imagine it in the sixties, like today a lot of people, among them artists, poets, musicians and many more that didn’t know yet  what to do in their life.

Is in this place that, officially, the Doors were formed in 1965 by two university students :Ray Manzarek and Jim Morrison.

It is weird for us to tell you who were The Doors, many stories have been told, many documentaries , movies, books…..

Let’s start from the name, it comes from a William Blake quote :”If the doors of perception were cleansed every thing would appear to man as it is, infinite”.

The mix of music, poetry, psychedelia and the power of Jim as sex-symbol contributed to make the Doors one of the major rock band of all time.

Jim itself was writing poetry, recording movies and study literature……you wouldn’t say it if you were just looking at his pictures always taken with him wearing a pair of leather trousers and maybe a fur….(famous picture from Gloria Stavers).

The life of the band was very quick, it lasted only six years, in 1971, after having completed the album LA WOMAN, Jim Morrison moved to Paris where he was found dead few month after in circumstances still not clear (drug abuse? alcohol abuse? both? or he just drawn while he was having a bath).

For sure Jim’s persona was very difficult to keep under control, a lot of incidents happened in his public (Miami concert) or private (Chateau Marmont incident) life.

If you don’t have so much time to dedicate to books we suggest you to watch one documentary : “Mr Mojo Risin: The Story of L.A. Woman” and one movie “The Doors” made by Oliver Stone in 1991 with an amazing Val Kilmer that resembles to Jim in a incredible way.

“Hello, I love you” has been written at the really beginning by Ray and Jim, back in Venice Beach days; the lyrics came after that a beautiful girl walked in front of the two while they didn’t had the courage to stop her…… they were too shy…. (luckily for the girl, few years later Jim would have stopped in an heart bit , or maybe the girl, recognising them would have stop by herself ).

So, they decided to write a song that was released few years later as part of the album “Waiting for the sun” of 1968.

We surely don’t forget to talk about two other members of the band that deserve a lot as well: Robbie Krieger (guitar and lyricist) and John Densmore.

We met Robbie this summer in Los Angeles and that was an extraordinary experience for us……. the band was celebrating the 40 years of LA Woman and they started a series of mini-concerts all across the town that terminated with the Sunset Strip Music Festival and a not-expected duo with: MARYLIN MANSON!

You should have been there! it was amazing……

That day we were so lucky to have the possibility to have almost (300 persons) a private show for us….. we were literally at 60 cm from Ray and Robbie……. the videos are on our channel on YouTube.