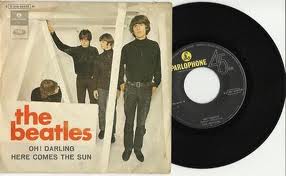 Here Comes The Sun – The Beatles

Most of the songs of The Beatles have been written either by Mc Cartney or Lennon (or both together), while very few have the contribution  of George Harrison or Ringo Starr.

“Here comes the Sun” is one of the most successful song entirely written by George Harrison in 1969 and released in the album “Abbey Road”, the last one of the band.

According to George’s biography, the song was written thinking about the stress (compared to the winter) that, during that year, the band and him were having…..they weren’t considered anymore musicians, but businessman……and this was “difficult to live with”.

He went looking for peace and privacy to the house of a old friend (Eric Clapton) and, finally, the sun started to rise……together with it this beautiful song.