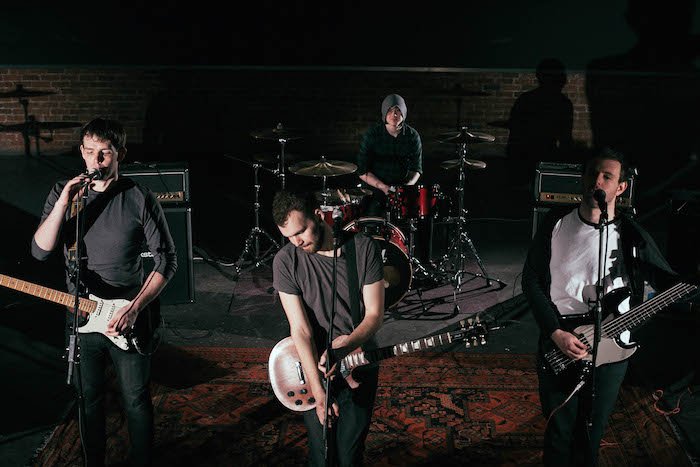 Here’s To Hoping – interview with THIS CITY LIMITS

RYL: Tell us about the title of your last album. Are you happy about the work you have done so far? What it does mean for you lyrically speaking?

This City Limits: Our new EP is called ‘Here’s To Hoping’, and will be out in the autumn. The title has become a bit of a slogan within the band, we apply it to everything and it keeps our spirits up.

It’s our second EP, but it’s the first we’ve done with the current lineup, and we’re really pleased with the results.

We’ve been working with a producer called James Hill, and he’s done a fantastic job putting the whole thing together. Lyrically speaking, the EP represents a formative stage in our lives, and the hope that we each have that we can continue making music with This City Limits.

RYL: What does ‘Too scared to swim’ mean for you?

This City Limits: The track is about growing up really. Everyone reaches a point when they look back any realize a lot of things have changed, although not always for the good.

The song is about the fear of letting things go, and about the mix of emotions you feel when you finally do.

RYL: Is there a common meaning/theme between all the songs on the album?

While each of the five songs is distinct in its own right, they all deal with a feeling of dislocation. There are references throughout to living in a city; the lights, the smoke scarred buildings and the expanse of people and life within which you have to find your own voice.

This City Limits: I think more than any other, the most personal song is ‘So this is Home’. The song imagines what might happen if you were locked in a room with yourself as a kid, full of angst, and with a desire to change the world.

How would your younger self treat you? Would they be satisfied with the choices you’ve made or would they be angry or scared?

I think the song tries to pinpoint a very personal fear that you get when you look at yourself in the mirror or take stock of where you’re going.

Despite the melancholia, the song it is ultimately hopeful, acknowledging the difficulty in properly evaluating yourself and recognizing the need to move forward.

RYL: How do you usually write the lyrics and music to your songs?

This City Limits: Will usually comes in with a set of lyrics and a guitar part. He plays it to the rest of us a few times and then we start breaking it down and writing extra parts.

We normally change everything so many times that it ends up with no resemblance to the original, but we like to make the songs as good as they can be before we go out and play them for people.

This City Limits: Amputate is about the realization that things have properly fallen apart, that despite the best intentions, there is nothing left that you can offer someone.

Really, it’s an anti-love song, taking all the sweetness you’d expect from a Hollywood romance and tearing it apart with a healthy dose of distorted guitar.

This City Limits: I think Will’s too modest to answer this one, so I’ll [George] do it. My favorite is the second verse in Amputate.

Will came in one day with a guitar part and a set of really nice lyrics, and we managed to put something together in about five minutes.

It was just one of those really nice moments when everything comes together effortlessly, and you don’t get many of those!

This City Limits: The last song we wrote is ‘So This Is Home’. It was a real labor of love, and it took us absolutely ages to finish it, but we think it was worth it!

The track has lots of different sections, going from back and forwards between loud to soft. It finishes with a big chorus, lots of vocals and loads of distorted guitars, which is basically our go-to sound.

RYL: Tell us about your touring projects this summer…

This City Limits: We’ve got a number of festivals and one-off shows to play this summer, and then we’ll be getting everything ready for the EP release.

Once it’s out, we’re back on the road for a UK tour in October/November.

We’re also making plans for another tour in early 2016, hopefully including some shows in Europe.