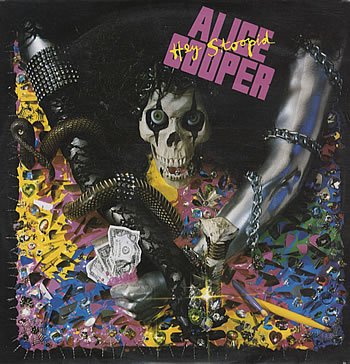 Vincent Damon Furnier, this is the real name of the King of the Horror Rock (or Shock Rock), Mr. Alice Cooper!.

Did you know that Alice Cooper was a name of a band before it became the stage name of Vincent? He used it only starting 1975…. 38 years ago…

Obviously the name had to have some mystic origin, Alice Cooper said that it was given during a spirit session with a spirit board………. The darkness were with him since the beginning.

As was one of the most important music producers of all times: Frank Zappa (that was also an amazing singer, songwriter and musicians  …You all know that!)

Before we will go to “Hey Stoopid” we want to tell you a funny story about Alice and a chicken….. during a concert in Toronto a chicken came on stage and Alice, thinking that chickens could fly, threw the chicken away from it, in to the crowd……….

Obviously he did a mistake! Chickens don’t fly; the chicken crashed an died in pain………this story was on all the magazines and newspapers…………it was the beginning of the “Shock Rock”!

The lyrics of the song are talking about Alice Cooper giving suggestions to a young man convinced to be a rock star and a young lady convinced to be in love…….while there is no love and no rockstar life.

Alice is almost talking like a dad to his child………actually he says in the song that he doesn’t talk like him, he just talk like a friend, like somebody that knows the reality and is just giving good advises to a…… “stoopid”

Can you hear the Slash guitar in the song?